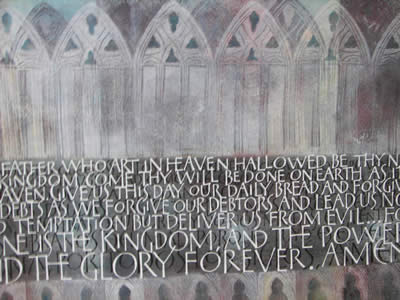 After my last pouty, frustrated post, I went to church last Sunday and the sermon really spoke to me. Our pastor is going through the Lord’s Prayer and last week was all about this part:

“Thy kingdom come, thy will be done, on earth as it is in heaven.”

(Sometimes you’ve just got to laugh when God so obviously speaks to exactly where you are!)

Not “Kari’s kingdom come, Kari’s will be done.” But His. Our pastor talked about how we have to submit to His plans even when they differ markedly from our own. My prayer needs to be for HIS will to be done, for His plan to come to pass, even if my way seems easier.

Actually, especially when His way appears to be painful and difficult. Because if that’s the case, there’s probably some “pruning” that needs to be done in me, to bring forth the fruit that I should be bearing. As much as we tend to shy away from these concepts, submission and obedience are how we show God our love for Him.

SO. I have been in a better place mentally and spiritually this week, just trusting God with the outcome of it all. Because fighting it gets me nowhere.

I’ve also been doing a little investigative work, and I’m thinking that our judge might be the one that went on leave for an additional month. I can’t be sure at the moment, but from studying the September court dockets, it appears that might be the case. All I can guess is that God’s giving us a little more grace to raise the rest of the money we need, so that stress isn’t on Donnie alone after I’m in Uganda.

Speaking of, I had a dream the other night that was so vivid. I was in Uganda, with Donnie, but he was going to be leaving in a few days (which is how it will probably play out). Everything was much wilder than I expected it to be, and this tiger kept pursuing us. At one point, I was sitting up on a hill with Donnie and some new friends and the tiger sprung up the hill at me, but then flew right over my head. I always knew he was lurking around — I’d see his orange haunches slipping through the tall grass and wonder when he was going to get me. I was crying over Donnie leaving and hadn’t had a chance to meet Pearl yet. I had hosts who gave me a tiny little handgun (made of straw! LOL) to defend myself against the tiger. So I went everywhere with that gun in my left hand and a big stick in my right hand.

The dream reminded me of how much I need to pray against the enemy’s influence in our case. As my friend Tymm has said before, Satan hates adoption and everything it stands for. So once again, I thank all of you who’ve stood with us in prayer and who’ve given to us to help us complete this.

In HIS perfect timing, of course.