When I first started this blog, I told our adoption story and promised that I’d answer some of the most commonly-asked questions we’ve encountered.

One of those has been, “Why Uganda?” and it’s surfacing again as Russia closes its doors to U.S. adoptions. We’re hearing people wondering why anyone would go through all the heartache to adopt internationally when there are kids that need homes here in America.

Of course, that’s a complicated question with no set answer; one that will vary with every unique adoptive family. I can only tell you the reasons our family chose to grow through international adoption, and from Uganda specifically.

The short, in-a-nutshell answer is that this is how the Lord led us. The details of that leading can be found in the link to our adoption story above. At the end of the day, obeying Him is what matters most to us.

I had a relative ask me point-blank why we wouldn’t adopt “one of ours” and realized she didn’t just mean an American child, but also a white one.

And the short answer of that, again, was that it wasn’t how we felt we were being led at this time.

The implication, of course, is that adopting domestically is easy, and that there are thousands upon thousands of little white kids languishing in foster care while “rich” people shop for kids overseas. But as any adoptive family can tell you, that’s seriously not the case.

I’ve been reading about the subject for over a decade and have yet to hear about an easy adoption, domestic or international. The system just isn’t set up to make it easy for anyone. Which, speaking of, brings me to an organization I just learned about today: Both Ends Burning. In their own words, “Both Ends Burning promotes adoption as a solution for children without parents. We exist to create a culture of adoption and to help facilitate changes in the current system. Adoption can serve as a champion for human potential, and as a responsible society we should be encouraging and promoting the practice of adoption.” Their website is definitely worth checking out. I agree with them that we have to stop making adoption so cost-prohibitive and unravel the miles of red tape constraining it so that more families will be willing to help solve the orphan crisis, both domestically and abroad.

I really hope that by the time my kids are old enough to become parents, they live in a world where this “culture of adoption” exists and that they feel welcome to grow their families however the Lord wills without having to feel like they need to constantly explain their life choices.

Anyway, back to Uganda. I think one reason God led us there was because we have the opportunity to make a bigger difference in the life of a child, and through a ripple effect, have a bigger impact on even more orphans. Creating that impact is a mission that our family has become quite passionate about. Uganda will always be a focus of our energies.

I do feel bad for any child who finds him- or herself without parents, no matter where he or she lives. But even kids in the American foster care system live a life of luxury compared to orphans in Uganda and other third-world countries.

Because those kids have nothing. Literally, not a thing.

American orphans get social security benefits until they’re 18, a free education, health care, and their foster parents receive a subsidy to help cover the costs of their food, clothing and other expenses. I don’t mean to diminish their struggles, which I know are many compared to kids growing up within the security of a family. But the safety net our country has created means that American orphans find at least their basic physical needs taken care of.

Kids in third world countries are abandoned in jungles, dumped in pit latrines, left along roadsides and behind buildings. They starve and go naked unless someone takes them in. In Uganda, they sometimes end up in prisons even though they’ve committed no crime, living in conditions so deplorable, Americans would rally to the rescue if we learned that stray dogs were being treated that way. They die of preventable diseases, like malaria and measles, or fall victim to HIV/AIDS. Their access to health care is sorely limited, if available at all. They can be raped, sold into slavery or into the sex trade, or sold to witch doctors for ritual sacrifice.

The lucky ones, like our precious Pearl, who are taken into an orphanage, have a somewhat better life. It’s still not anything we would consider acceptable in America, but they have a roof over their heads at night. Most days, there’s at least a cup of porridge and maybe later, some beans and rice. Some get to go to school. Most have clothes to wear, though they’re communally-owned, rarely fit and don’t always include shoes. They usually have beds, though they often sleep  three or four kids to one twin-sized bunk, which looks like this, with a simple foam mattress, a thin blanket and no pillow: 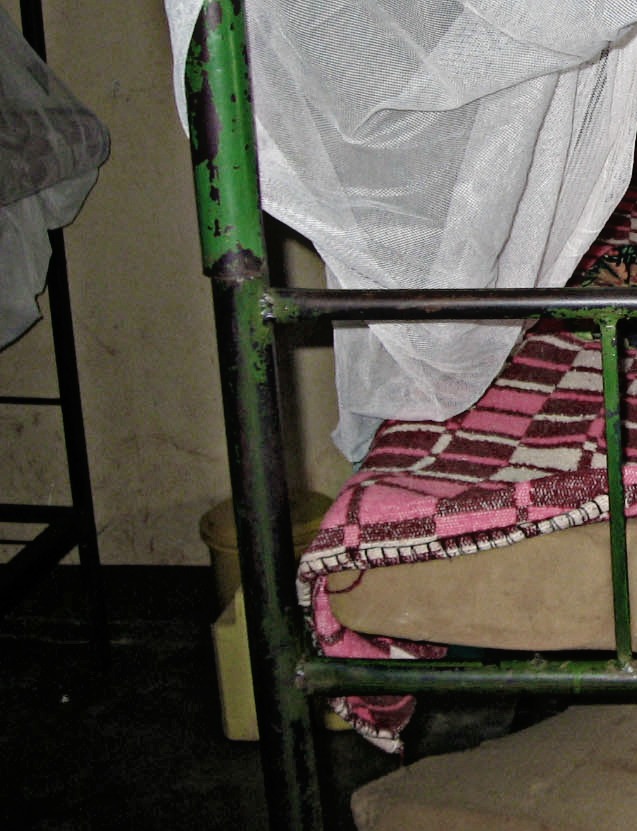 This one is lucky enough to have an intact mosquito net, but for ages even these kids slept under dirty, hole-filled nets that did little to protect them from malaria.

A friend of mine went to Kampala, Uganda last year on a mission trip, and said that every woman she met at a Christian women’s conference — yes, every woman — was caring for several children not her own because they couldn’t bear to see these little ones suffer or die.

Have all of the Christian women you’ve known taken in several orphans? I didn’t think so. Here in America, even within the church, we just don’t do that. It’s not our “normal.” We don’t see what life is like for foreign orphans, unless we deliberately educate ourselves and open our eyes to their truth.

I spent the first 40 years of my life completely oblivious to it all. Considering that I’ve been a Christian since the age of 18, I think the American church as a whole has a whole lot to answer for.

My point is that my husband and I have limited resources (hence, the fundraising). I’m not a supermom who can raise 20 kids, even if we did have the money and space for them. Because we only have so much to give, we feel compelled to give it where it’s going to make the most impact. I can’t say for sure if there are more adoptions in my family’s future; only God knows if that’s the case and where those children would come from. Maybe a domestic adoption is in my future. Maybe not.

But for today, for now, we believe with our whole hearts that God is saying, “Pearl. From Uganda.”