(Continued from Day One)

The air in Cairo had been cool, but even at 3:00 a.m. the Ugandan night air was warm and damp. We tiredly shuffled down the steps onto the tarmac and another 20 paces into the nearly-deserted terminal, where the air was just as humid and still inside. 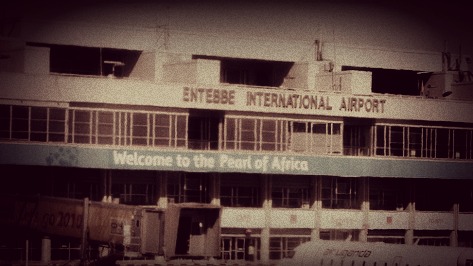 We got in line to go through customs, and it was a quick and easy process. Then it was on to baggage claim, where we discovered that one of our bags was missing. We’d been told to bring our court clothes on our carry-on bags, along with our basic toiletries, so thankfully, we had that. All our clothing made it safely, but the lost bag held all of our full-size toiletries, our snacks, pretty much all of our comfort items.

Oh, and in a total brain-fart moment, somehow we’d packed all our malaria medication into that one missing bag, too.

We got our first taste of “Uganda Time” when we filed the claim for the lost bag. Though it was the middle of the night and nothing was going on at the airport, though everyone was friendly, they were so very slow compared to American standards. What would’ve taken five minutes at home took nearly 30 minutes, with everything carefully handwritten out, the stapler nowhere to be found, the clerk disappearing for minutes at a time. There was just no sense of hurry or urgency at all. I didn’t really find it irritating, though, because I’d been told to expect it. It was more amusing than anything else, and we passed the time chatting with a missionary who’d also lost a piece of luggage.

A guard lazily waved us through the “Nothing to Claim” line, and outside, we met our driver who’d graciously waited for us. We hired Francis and his lovely wife Harriet was there to drive us to the Apricot Guesthouse in Kampala. It was after 4:00 by the time we left the airport and it was just crazy to see the number of people who were still up and about along the road from Entebbe. We passed lots of street vendors, and nightclubs blaring music — if you could call a closet-sized shanty a nightclub — people driving around on boda bodas (motorcycle taxis) and walking everywhere. The first thing I noticed were the smells: mostly the acrid smoke of burning trash, mingled with exhaust fumes and wafts of fried onions and charcoal when we passed the food stands. When the van was moving, the air blowing in felt very cool and comfortable. I noticed Harriet was wearing long sleeves and a knit cap. She said that to Ugandans, it was rather chilly out.

I admit to choking back tears in the back seat as Donnie and Harriet chatted up front about any and everything. It was my first time being face-to-face with conditions so poor, and I’m sure exhaustion didn’t help my frame of mind. The buildings were held together with sheet metal, wood scraps and whatever else they could find, and everything was so close to the road that you just felt immersed into it. There were deep ditches along the road and occasionally the smell of sewage rose out of them. I saw a man passed out on his face on the steps outside a shop, and people just walking around and over him. It was a lot to take in at once.

After a half hour or so, we approached the area of town where the guesthouse was located. We began to see small houses behind walls topped with razor wire, and still so many people walking about. The guesthouse was enclosed with solid metal gates; the gatekeeper opened them and it was like driving into another world. Even in the dark, it was clear that the grounds were beautifully landscaped and immaculately kept. We paid Harriet, and we followed the worker who carried up our bags.

We had a simple room on the second floor, with a glossy tile floor, a king-sized bed for us and a twin bed for Pearl. Thankfully, there was a fan that I immediately turned on, and a private bathroom. (Although the toilet was quite a tight fit for us, and it wasn’t until the last day that we learned we had to request the hot water to be turned on before we showered.) 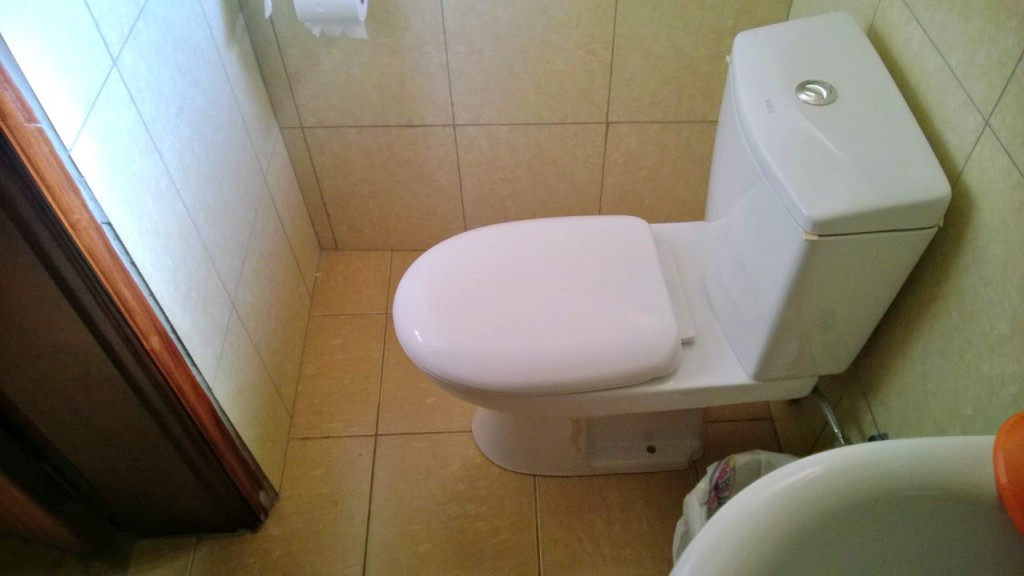 I don’t really remember what we did over the next few hours. We both took (COLD) showers, Donnie shaved, I know I cried a bit more, we checked email and updated Facebook, we slept a little. We finally ventured downstairs for “breakfast” at 3:00 p.m, at which time our only choice for food was a plate of pineapple and papaya and a loaf of bread for toasting. It was adequate, though, and I found out that Ugandan pineapple is truly one of God’s most delectable creations.

They told us we were too late to request dinner at the guesthouse, so we decided we’d opt for a Power Bar later and spend the rest of the day catching up on sleep. The orphanage pastor, our daughter and her birth mother weren’t scheduled  to come until the following day, so we went back to the room, stretched out under the fan, tucked in the mosquito net and promptly zonked out.

At 6:00 pm. we were startled awake by a light knock at the door.

“Someone here to see you,” said a voice.

Donnie hopped out of bed to peek out the window, which looked out over the gate and parking area.

“Oh my gosh…is that Pastor Ronald?”

My head heavy with sleep, I stumbled over to the window and saw that it was, indeed, him.

We stared at each other a moment.

“What do we do?” (I’m really quite skilled at asking stupid questions at stressful moments.)

“We get dressed and go meet our daughter!”