I can’t recall ever having been so dehydrated.

The midnight to noon hours of that January Monday are one big blurry memory of the same repetitive sequence: stomach cramps, rush to the bathroom, wash hands with terrible-smelling hotel soap, flop back in bed, try to sleep.

After the first couple of times, when the fever began, I thought, “This must be the traveler’s diarrhea I was warned about.” So I stopped taking only Pepto-Bismol and asked Donnie to find the Cipro. He also brought me a Coke from the fridge downstairs, and a Stoney — a natural ginger soda so strong, it probably would’ve really helped — had I been able to get past the burn enough to actually consume it.

Around 7:00, I finally gave up the fight against vomiting and experienced the most painful retching I’ve ever endured. (A friend still teases me because I described it as feeling like my stomach was trying to turn inside-out.) It just went on and on and on. 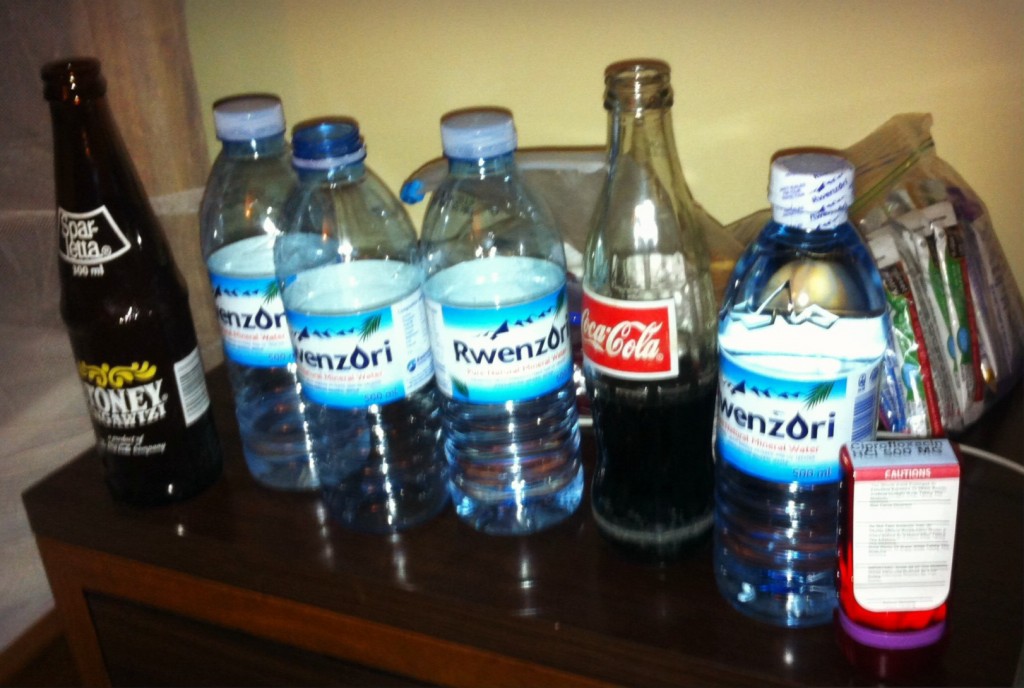 After that finally passed, I was so parched, I wanted to gulp down the contents of all those bottles. But I knew I couldn’t. Each tiny sip was like torture, trying to keep from triggering my gag reflex and becoming even more dehydrated. The skin on the backs of my hands remained standing when I pinched it up; I couldn’t say more than a couple of words before my dry lips and tongue stuck to my teeth, ,making me slur like a drunken sailor.

I was miserable. And everyone else was worried.

Donnie went down for breakfast with Pearl, her birth mother “H”, and the pastor came over from his hotel to spend the day with us. I think I finally slept a bit at that point. I knew I’d have to get up and be presentable for our meeting with the attorney that afternoon, but in the meantime, Donnie gave my regrets to everyone and explained that I’d been sick all night.

I dozed off and on for a few hours, while Donnie and Pearl enjoyed some father/daughter bonding time. They colored and took pics together… (again — forgive the cheesy smiley faces — still no court ruling, and I can’t share her face here ’til it comes!) 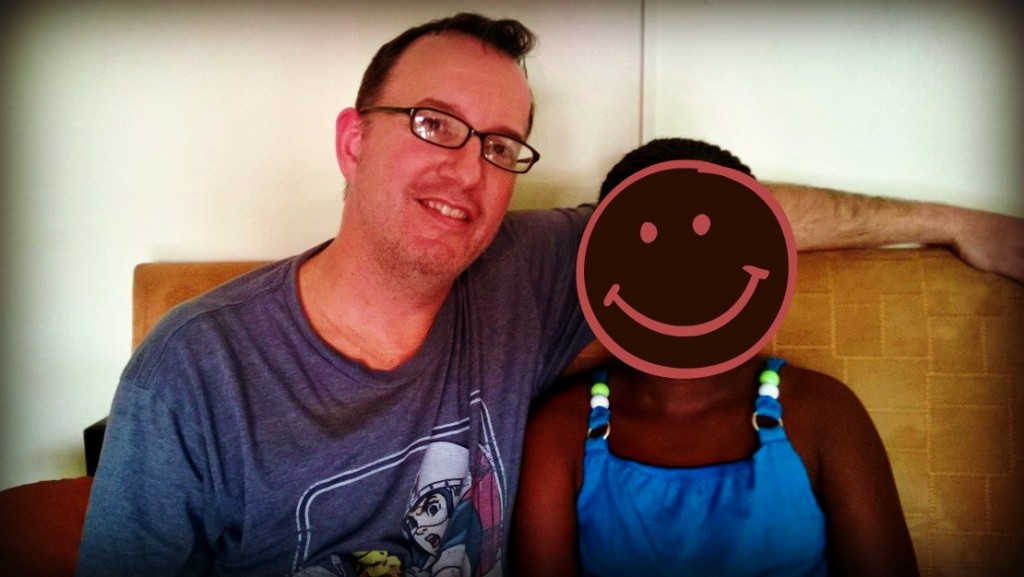 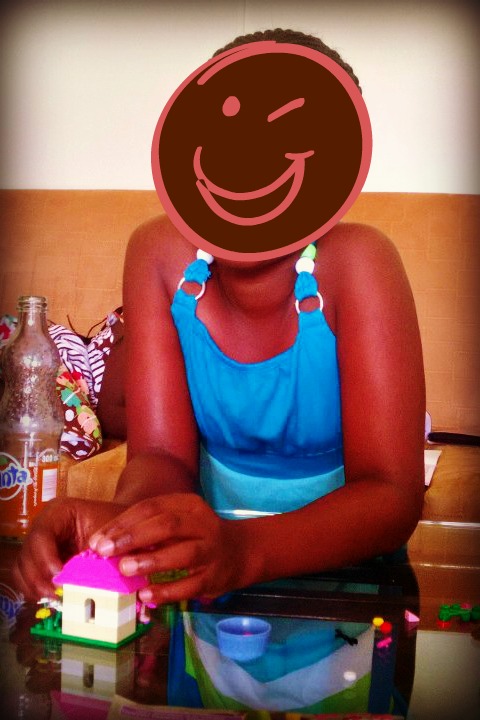 Pearl and “H” discovered the fun of playing Fruit Ninja together on the Kindle…they thought it was hilarious! 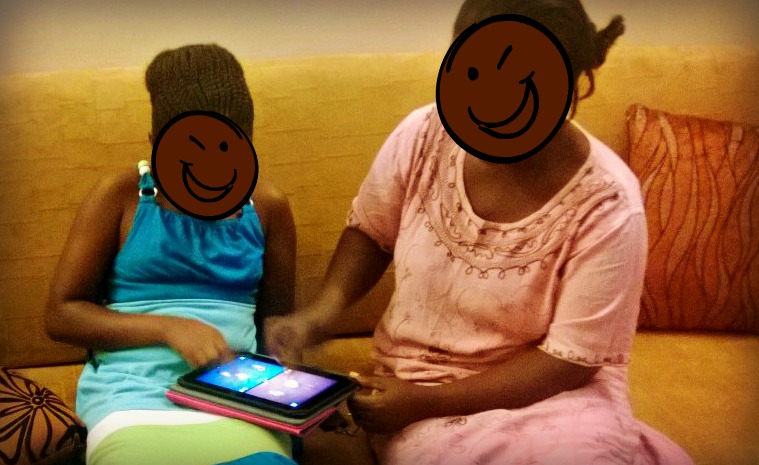 Pearl asked Donnie if she could go upstairs and check on me. It was a really sweet surprise, though I felt terrible that she had to see me looking like that. She looked very concerned and said she was praying for me and rubbed my arm. She asked me to come down if I could. I assured her that I would do that, soon. Donnie put in an order for dinner at the guesthouse, so I had to smell cooking all day long. Yuck! I could’ve sworn I was smelling fish, but they were served chicken. (That’s a little scary if you think about it! LOL Donnie said the food was really delicious, though.)

Around 5:00 p.m. our attorney came to meet with us. I put on a nice skirt and top, but I was pale and sweating from the fever and truly embarrassed by my appearance. (Later, the lawyer would tell us that he was a bit startled when he saw me and feared I wouldn’t be well enough to attend court the following day. So yeah…this mama was looking ROUGH. LOL)

We met outside under this lovely tented area, where it was cool and comfortable and beautiful…. 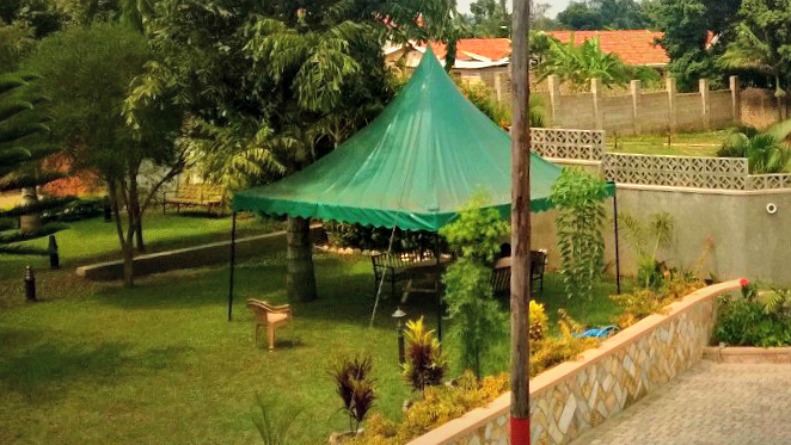 He prepared us for what was going to happen the next day. He said that our judge was a Christian and would welcome honest answers about our faith’s involvement in our adoption decision. It was a pleasant surprise to hear that — open confessions of faith aren’t exactly encouraged here in the states anymore — especially not in a legal venue. I’d heard scary stories about families facing a really tough Muslim judge, so hearing this was a big relief.

After our brief meeting, I went back to our room to rest while the others ate dinner. After, as I’d promised Pearl, I came back down to visit with everyone. This was the last night we’d have with H and there were so many things I wanted to ask her about Pearl’s life so far and their family history. I didn’t really feel like being vertical, but I was pretty upset that I’d already lost so much bonding/talking time to sickness. I was determined not to lose another minute of this day.

H doesn’t speak very much English, so the pastor interpreted for us. I wasn’t able to ask very many questions, as the conversation seemed to lean more toward H asking questions about us. We showed them a photo album we’d put together and told her about the family and where we live. She kept telling the pastor to make sure we understood her gratitude for what we were doing, and kept referring to us as her sister and brother. There was one precious moment when our eyes met as mothers and she smiled the same soft smile I’d seen a hundred times before on her daughter’s face. She knelt down and grasped Donnie’s hand, and then mine, and it felt like receiving her blessing. The pastor explained that in their culture, deep gratitude is expressed by kneeling. I think we all had tears in our eyes, and we made sure H understood how thankful WE are for the gift she’s given us. It was a very, very sweet moment that I’ll remember forever.

While we were sitting on the sofa next to each other, Pearl kept reaching up and playing with my hair. It’s curly and unruly sometimes, and it was like she was trying to get it to lay down a bit. I wanted to giggle, but the back of my neck was damp with fever-sweat and it was kind of embarrassing for her to feel that. But she didn’t seem to mind, and there would be other times over the next few days that she’d try to get my hair to cooperate. It was one of those funny introductions to parenting girls that I hadn’t really thought about. I’ll probably write another blog post at some point dedicated to grooming lessons we taught one another during that week together. There’s definitely some humor in how that played out!

We took Pearl upstairs before bed and gave her the dress and shoes we’d bought for court. She liked them a lot and though it seemed to me that the fuchsia flats we’d brought were a little too tight on her feet, my pink-loving girl stubbornly shoved her foot into them and I don’t think she wore another pair of shoes the remainder of the week!

Thankfully, I rested better that night — even though I woke at 2:00 a.m. to find an almost three-inch-long cockroach hanging on the outside of the mosquito net near my face! (Thank the Lord for heroic bug-slaying husbands!)

I remember fading off to sleep thinking that it didn’t seem possible that we were only 12 hours away from our long-awaited court date. Finally, the day had come!