We didn’t think this day would ever come, then BAM! Friday, January 17th was finally here and it was time to go meet our girl!

After lots of tears on my part, picking up Nana to stay with the boys, separation anxiety for me and the kids, tons of cleaning and packing (we ended up bringing waaayyy too much stuff!),  and countless prayers, we were finally dropped off at the airport and on our way. 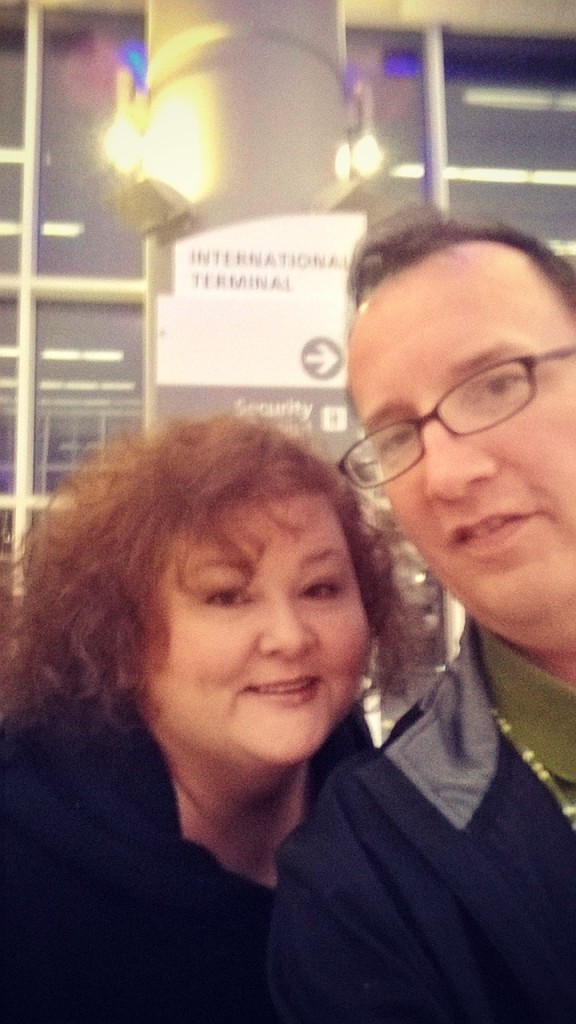 My face…it oozes with anxiety. And those puffy eyes from crying…mercy. Donnie, however, is cool as a cucumber, as always! (The International Terminal in Atlanta is super-nice, by the way.)

So we flew on British Airways, and once we got settled into our seats, I was doing a bit better. I let go of the worrying and started to get excited. We were on a plane! Going overseas! To meet our girl! 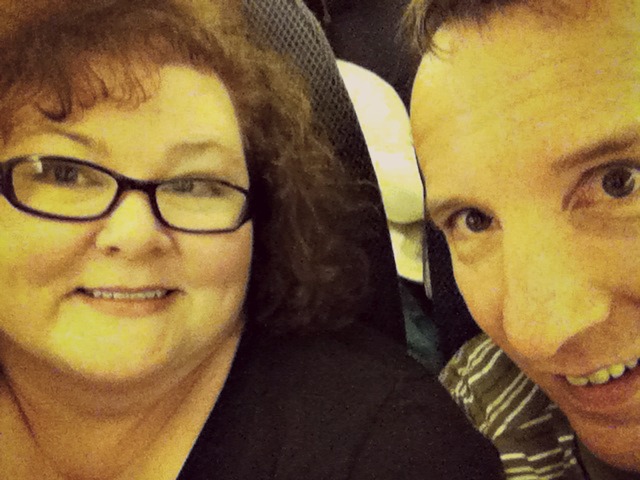 After sitting on the runway for an hour, the 8-hour flight to Heathrow was basically uneventful. I was too wound up to eat, but Donnie enjoyed some kind of chicken curry thing. BA has these cool in-flight entertainment screens where you can watch all sorts of stuff. Donnie watched a lot of movies while I flipped channels like I do at home, catching bits and pieces of TV shows, music, movies, etc. I mostly enjoyed tracking our flight. (I am soooo boring!) I must’ve fallen asleep or something because I missed the screen shot of landing in London. Oh well. 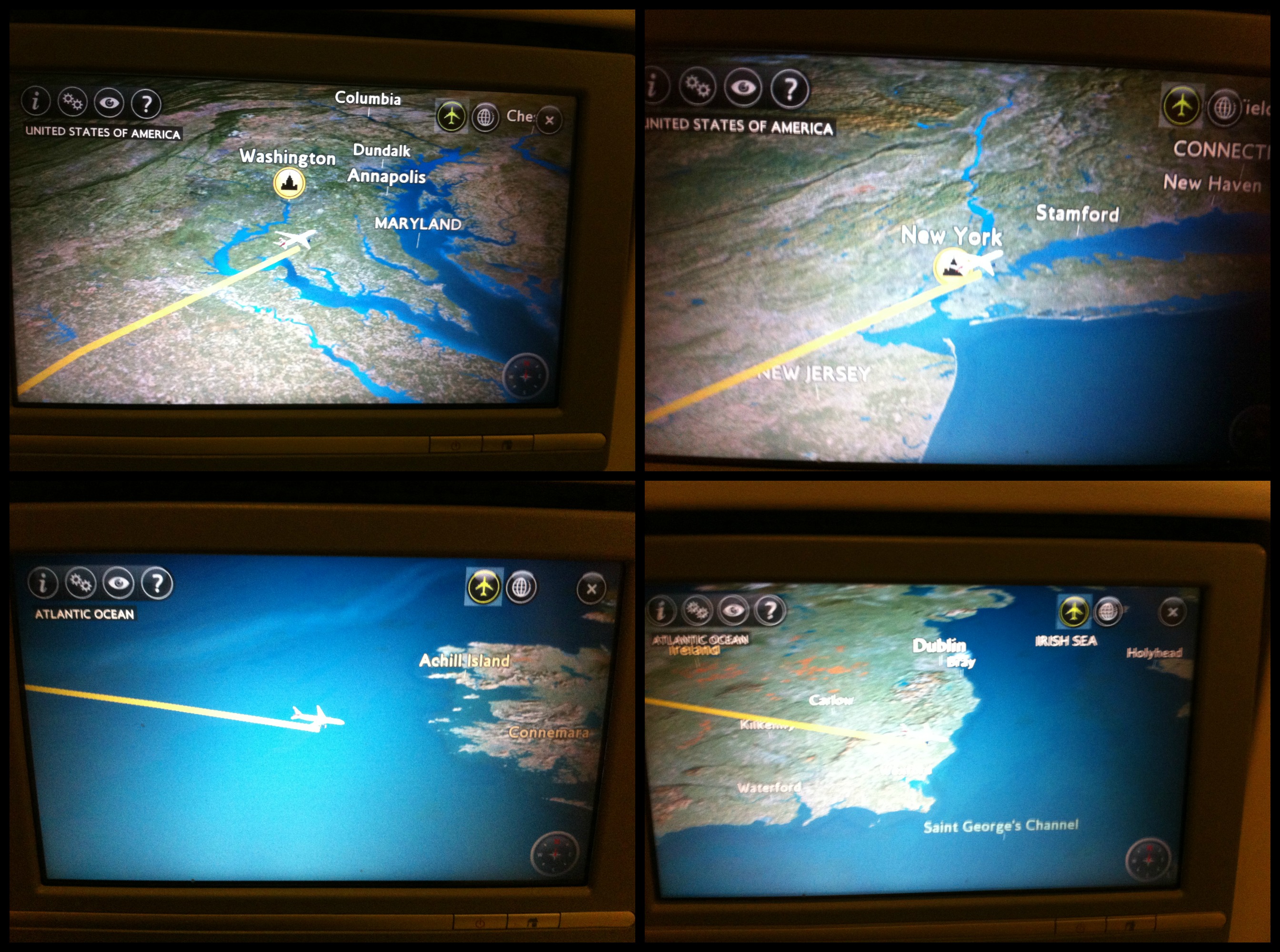 Once we landed, though, we were in a huge hurry to make our connecting flight to Entebbe. There was only 1 hour and 20 minutes between flights, and we now know that is NOT enough time to navigate through the steel-and-glass rat maze that is Heathrow Airport. Especially not when you arrive late to begin with, thanks to ground delays in Atlanta.

We didn’t make it. We got to security at the exact moment our flight was closing. So we detoured to the counter instead. My stress level at this point was a 12 on a scale of 1 to 10, and only grew worse when the CSR called over a supervisor…. 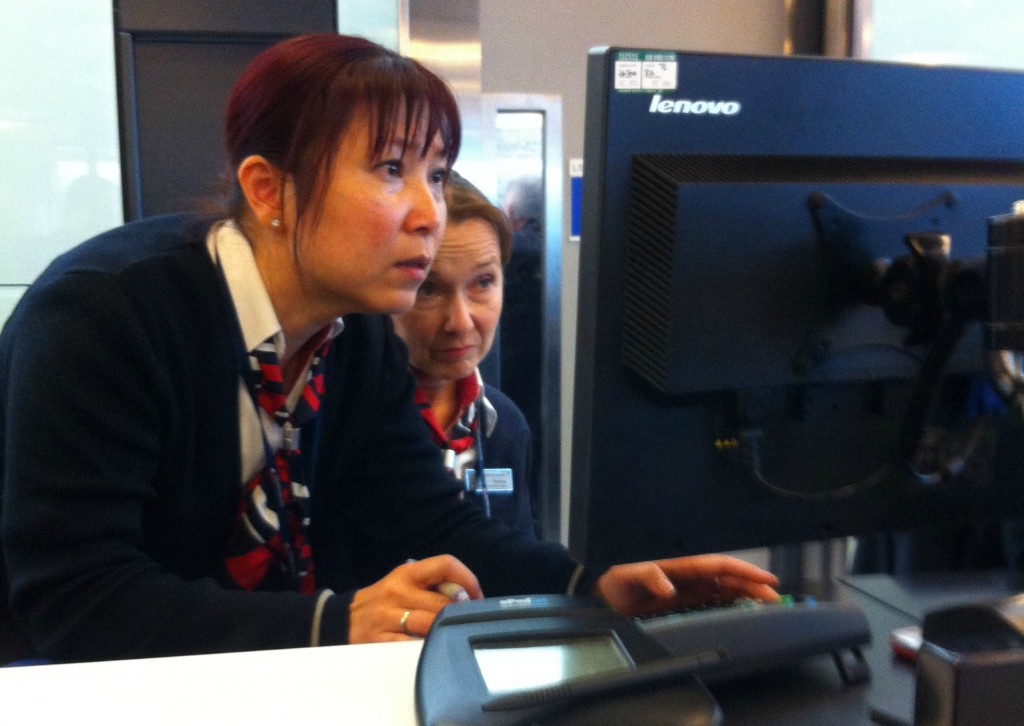 Trust me, you don’t want the people managing your journey to be wearing these expressions. At one point, there were five CSRs staring with bewilderment at that screen. Unnerving? Yeah. Just a wee bit.

This was Saturday afternoon by now, and there wasn’t another direct flight to Uganda until Monday. We had exactly two options: fly to Johannesburg, South Africa then back up to Entebbe, thus spending the rest of our natural-born days on an aircraft. Or switch to Egypt Air and layover an hour in Cairo before connecting to Uganda, arriving in the wee hours of the morning.

Of course, that did nothing for my anxiety levels. (I should probably interject that I’m not afraid of flying at all. I was a nervous mess because of leaving my kids, because of the Great Unknown ahead, because I started the journey sleep-deprived. Flying doesn’t bother me a bit — I even think turbulence is fun!) Donnie and I had a few hours to kill, so once we finally got to Terminal 3, we used the airline’s “inconvenience” vouchers  to get some Starbucks and sandwiches. It took me 30 minutes to choke down half a chicken sandwich. Anxiety isn’t fun, but it sure is great for weight loss! (Little did I know, I’d soon encounter something else that’s great for weight loss…)

So, we board the Egypt Air flight a few hours later, and the captain was this scowling 6-and-a-half foot tall man who bore an uncanny resemblance to 9-11 hijacker Mohamad Atta. (Unnerving? Yeah. Just a wee bit.) The flight attendants grabbed my boarding pass and conversed rapidly in Arabic before pointing us down the aisle. We were pleasantly surprised by how roomy the plane was. The seats were more comfortable than the ones on British Air, and there was even in-flight WIFI service. Score!

There were a few other Americans on the flight, but it was mostly full of Egyptians. Good heavens, the women were beautiful. I mean, impeccably dressed, perfect hair and makeup. Just gorgeous. I felt like a blob in comparison. I tried not to giggle over the cartoonish-sounding music that was playing on the plane. And then once everyone was seated, before backing out of the gate, a picture of a mosque was shown on the screens and a very long Islamic prayer was read. The plane was totally silent during the prayer, which lasted a full minute or more. Then the safety video was shown in Arabic first, then English, then French. All the announcements were made in that order, too. A meal was served — some kind of odd curry-ish chicken thing, with oily round rice, and a vegetable that seemed a cross between zucchini and eggplant. And a salad of cucumbers, canned corn and giant smashed olives. And a roll that didn’t seem to have been made with any salt. But the hot tea was good. 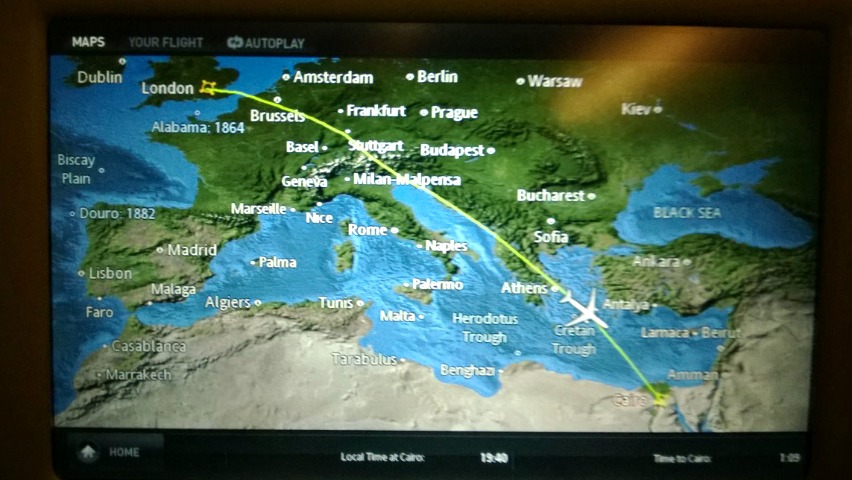 So as we approached Cairo, we commented on how it was neat to be able to see both ends of the Nile River on this trip (our daughter is from Jinja, where the Nile begins). It was dark, but we could see the moon reflecting off the Nile, and that was very cool indeed. 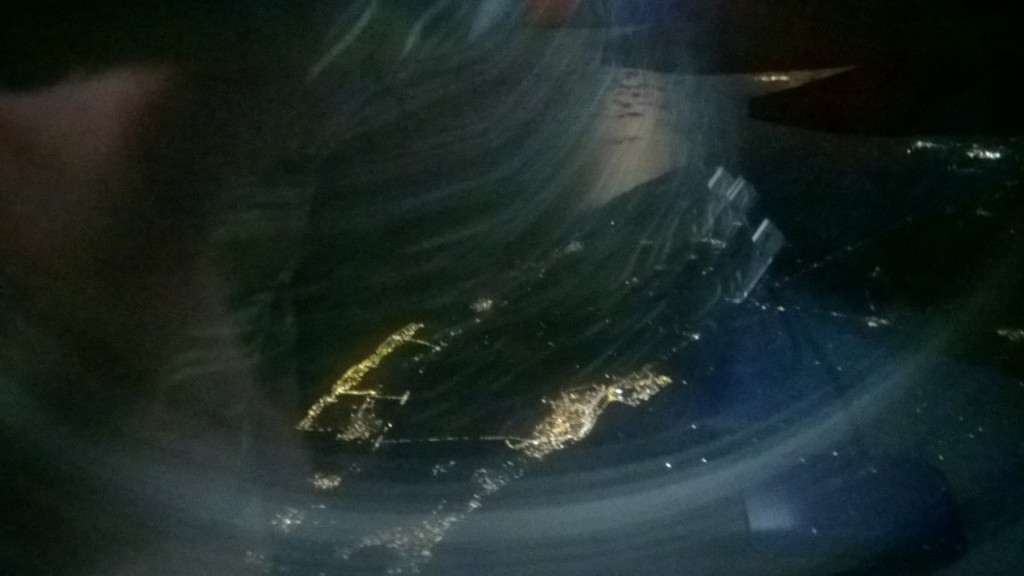 Cairo at night. I’m thinking the waterway to the left is part of the Nile Delta, but I’m not sure… 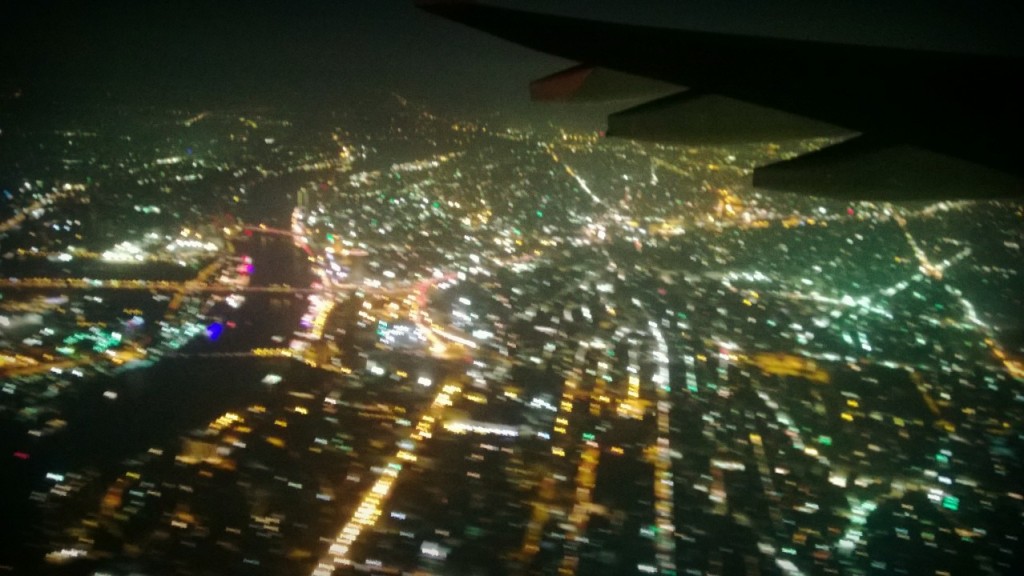 So, we land in Cairo and the airport is much smaller than I expect it to be. We really only had time to navigate our way to the next gate, which was fine with me. We did feel a bit like targets as we wove our way through crowds of Imams in their long, flowing robes, and women in full black burqas, the kind with a screened panel over their eyes. We had to go through two “security” checkpoints, both fitted with totally outdated equipment and staffed with angry-looking guards. We didn’t have to remove our shoes, or show our liquid containers, or take electronics out of our carry-ons, or anything we had to do in Atlanta and London. It didn’t exactly inspire confidence in their security protocol. We did have to show our American passports at each location. (Unnerving? Yeah, a bit.) The “gate” was actually a doorway at the end of a long corridor, and outside a bus awaited to carry us to the plane. We were just relieved to have made it in time, because if we’d gotten stuck in Cairo, I don’t know what we would’ve done!

The second plane was considerably older and less comfortable than the first Egypt Air flight. We were served a meal almost identical to the other flight, only this time the oily rice was long-grain instead of round. We debated which Egyptian Curry Surprise was the best and the second flight won. However…about two hours into the flight, we started smelling wafts of cigarette smoke. There had to be at least a dozen people “secretly” smoking under blankets on this “non-smoking” flight! And the crew said nothing about it. Heck, they were probably joining in.

I kept looking out the window, but there was nothing to see over that part of Africa except darkness punctuated by the occasional dot of light or two on the ground. Even as we approached Entebbe, it was so much darker than what you expect to see flying over a populated area. I didn’t manage to snap any pictures of Entebbe as we landed. By then it was 3:00 a.m. on Sunday, we’d lost count of how many hours we’d been awake, and all we could think about was meeting our driver and getting to the guesthouse to sleep.

Unfortunately, it wasn’t going to be quite that simple….