The road was a narrow strip of rusty red clay that dropped sharply into deep ditches littered with trash. Chickens strutted lazily across the dirt while a few goats slept in the sunshine atop roadside beds of tall grass. It didn’t seem like the row of stucco storefronts quite belonged there. In Georgia, you’d see farms and cotton fields along a red dirt road like this, not stores. I wondered where their shoppers came from, and later learned it would be on foot; there was a much larger network of huts and houses here than was immediately apparent to me.

It seemed an even odder location for an orphanage. It’s a long story as to how they ended up in this temporary location, but like he’s always done, Pastor has made it work.

When we drove up, dozens of familiar faces poured out onto the porch to greet us. After initial hellos, a cautious jump across the wide ditch, and lots of handshakes, we entered the building. It was a single, dark room, not much bigger than my living room at home, with a wood and screen panel in the middle to separate the boys from the girls. 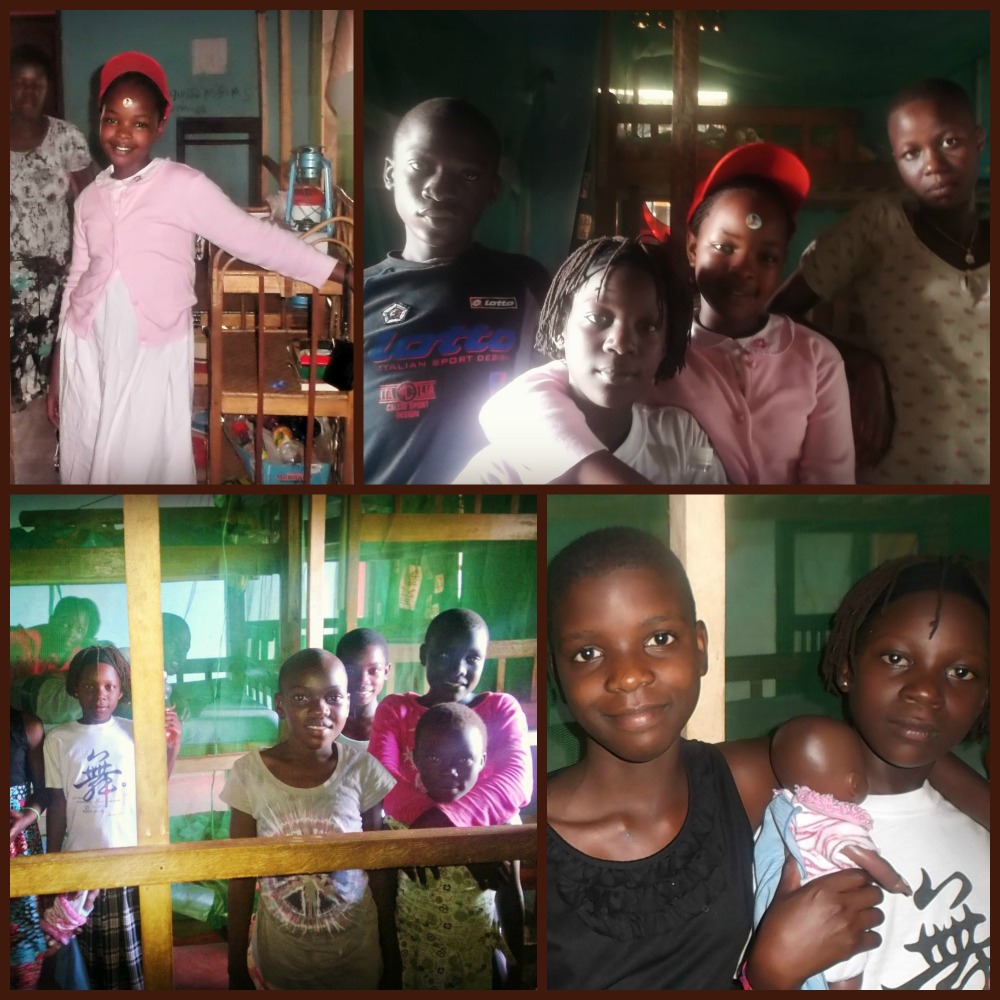 Bunk beds were crowded in the space, stacked three high and draped with somewhat holey mosquito netting; other than the beds, I only noticed a few small shelves where supplies were stored. No tables for eating or chairs for sitting. It was austere, to say the least. 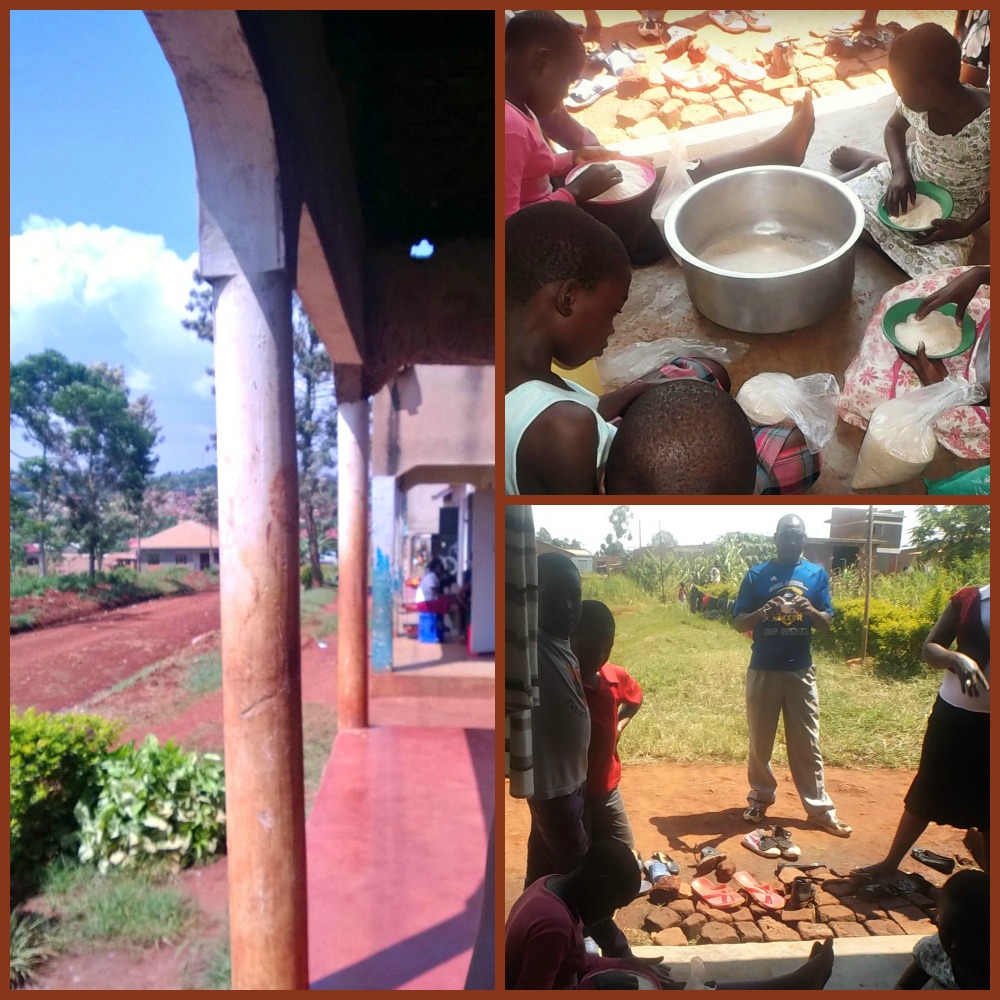 We quickly moved through the building and out the back door, where we saw half a dozen girls sitting on the tiny patio, cleaning rice to remove stones and other impurities before cooking it for their daily meal. Off the patio was a small closeted area that I’m guessing hid the latrine or toilet. And that was the extent of their shelter. There was a long yard behind the building, and laundry was stretched out to dry along the shrubs. There was no kitchen for cooking the rice — just a small round charcoal stove for that big metal pan fit atop. Two kids were bent over small plastic buckets, washing plastic plates and cups. I wanted to help, but wasn’t sure if I should offer to or not.

I didn’t see any toys, or pictures or pretty blankets or anything that would make this feel like a place where children lived — not even an old ball to kick around the yard. The only toys were the two baby dolls we’d given Violet, that the other girls graciously held and shared. Violet joined some of her friends in a pat-a-cake game on the front porch, but those few moments were the only times I saw anyone engaged in play.

Later that night, I’d think about what I’d seen, and how these simplest of living conditions are still such a gift to these kids. It’s a richer life than the one they’d have in the remote villages most of them come from.

It’s still hard for that to sink in, almost two months later, that one meal a day and access to school — things totally taken for granted here — are so hard to come by that a widow will send her child away to receive it. Some of the kids in this orphanage are double-orphans, meaning that both parents have died. But many have a living parent who cannot provide even the most basic of the child’s needs. To prevent them living on the streets, they send them to places like this, where the kids are stacked two, three, sometimes four on one twin-sized mattress, twenty-plus kids and adolescents in a living space not much bigger than the average American bedroom.

I’d stay awake a long time that night, having seen how my daughter has spent the past five years of her life, thankful that she’s been fed and kept clean and educated. But it’s a stunning realization to see the difference in how we define those words here compared to what they mean there. “Fed” in America means three meals a day plus snacks. “Clean” is fresh clothing in the morning and at bedtime, daily baths and toothbrushing, shoes on your feet wherever you go. “Educated” means free access to twelve years of schooling, and if you’re needy, they’ll even give you feed you breakfast and lunch for free.

Nothing is free in Uganda. Nothing. There’s no governmental safety net, no food stamps or Medicaid, no free education. The only things you have are what you earn for yourself or are given. Period. I realized in a new way that our daughter truly cannot have any idea the extravagance she is going to experience, even in our ordinary, middle-class American world.

Anyhow, back to the orphanage. Everyone was so warm and welcoming, in that gentle Ugandan way. I loved finally meeting everyone we’d talked to through the years, and seeing how much the kids had grown since I’d last seen their photos. 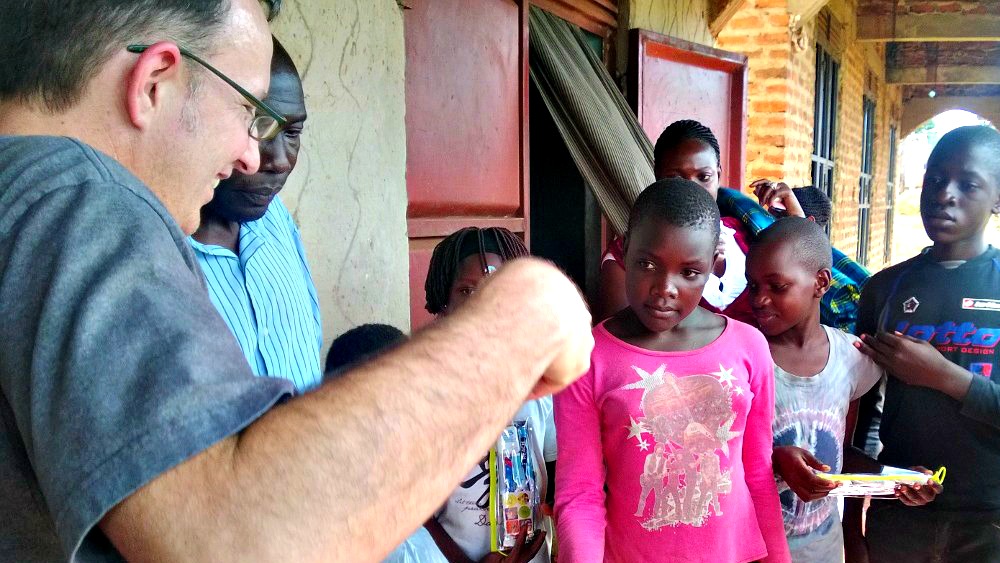 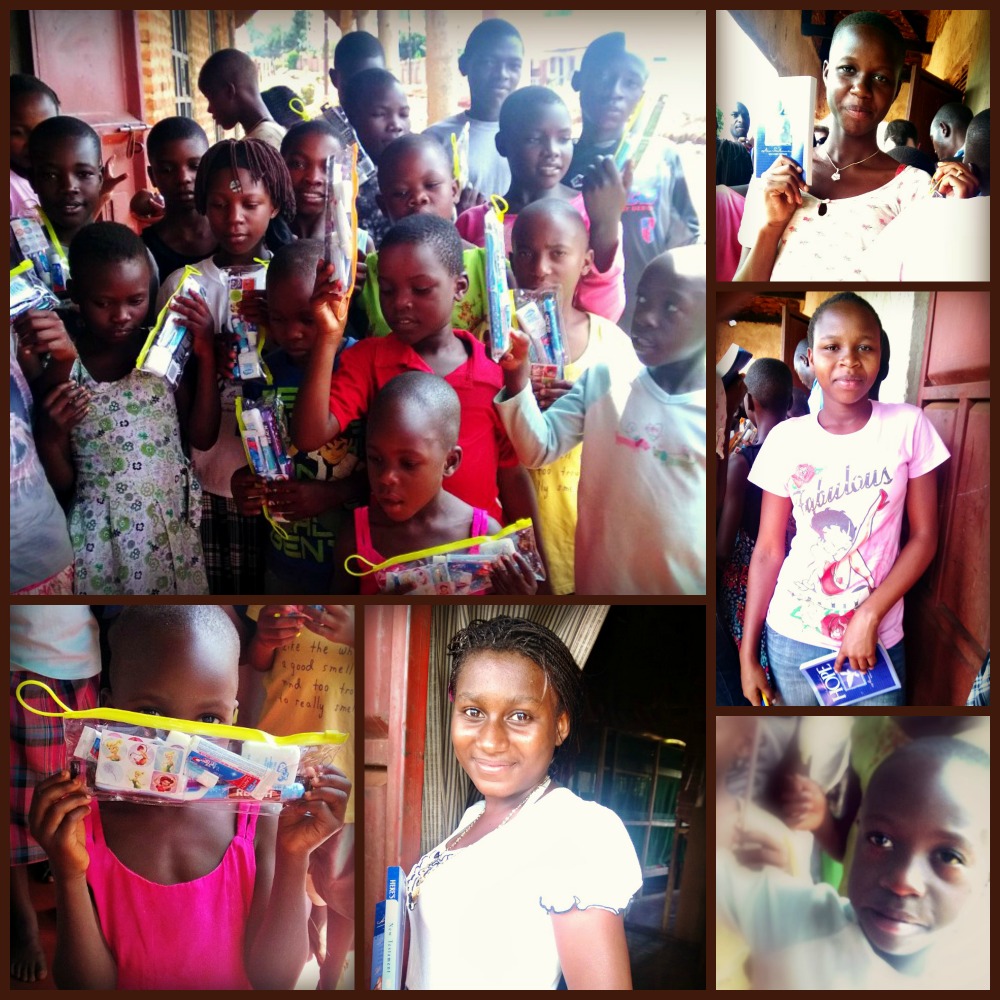 We had an opportunity to distribute dental care kits and bibles that were donated from friends back home, and Donnie was really in his element. Look at all those beautiful smiles! My friend Bev asked me if there was something in the water there, because Ugandans are so lovely. I have to agree!

After we distributed the gifts, we presented Pastor with a french press coffee maker and some Seattle’s Best coffee. We also gave the kids some sweets and 10 lbs. of beef jerky we’d brought from America.

Then we piled as many people as we could into our driver’s van, and took off for a short drive to the orphanage’s new location, the building site they are trying to finish and move into as soon as possible. 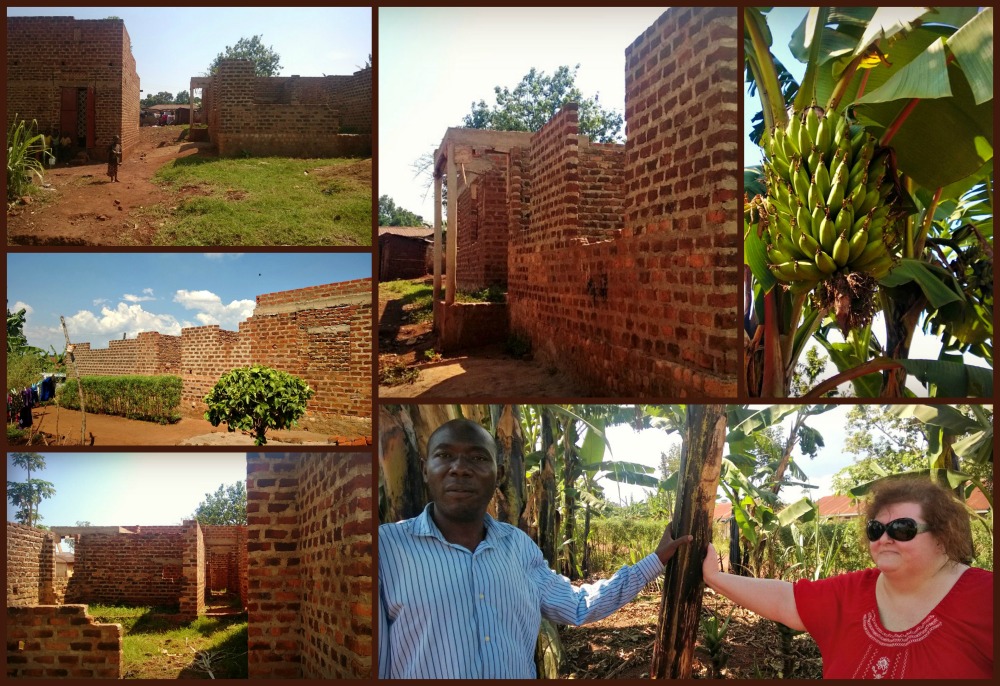 They’ve really done a great job on the building. Most of the walls are up and I believe they plan to move in as soon as there’s a roof in place, living there while finishing up the rest of the construction. It’s going much slower than any of us would like, due to a lack of funds and laborers willing to donate their time. (Please keep them in your prayers and if you’re able to help fund the construction, let me know.)

As you can see above, after touring the site, I sought shelter under their banana trees. My ghostly-white skin was broiling under the equatorial sun and I had to find cover from it! (Note to self: next time, bring hat!)

As we stood there, cooling off, a strange, tinny-sounding version of the “Titanic” theme song begin waft through the air. At first, I thought I was hearing things, but then it grew louder and Donnie commented on hearing it, too. We said in unison, “That sounds like an ice cream truck!” and then chuckled at the thought of an ice cream truck cruising this corner of the world. But then I turned around and saw something that amazed me. And little did we know, that cheesy song was bringing us one of the most meaningful moments of our entire trip.