The next day in Uganda started early. I was feeling somewhat better, so I went down to to breakfast for the first time since arriving at the Apricot Guesthouse. 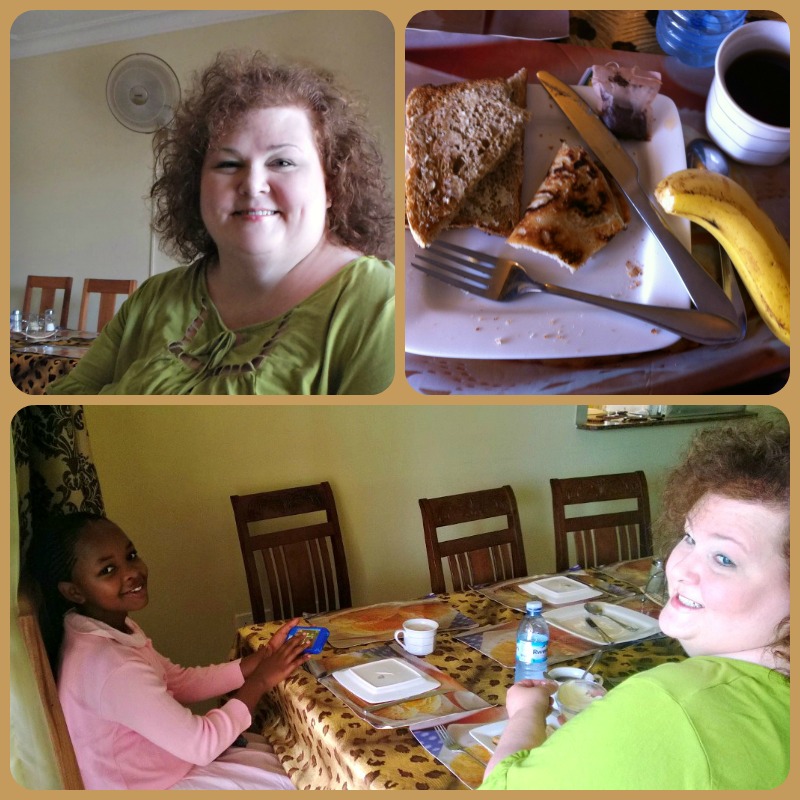 And it would be the last time there, because we were leaving for Jinja that day. As you can see from the pic, I stuck to carbs — toast, banana, a dry pancake, tea. And of course, more Imodium before that road trip! Hahaha!

On the way out of Kampala, our driver Francis took us to a neat market to shop for souvenirs. Unfortunately, about five minutes into shopping, I started feeling weak and dizzy again and had to go sit in the car. When I uploaded pictures from my camera, I was SO disappointed to see all that I missed! Violet had taken dozens of pics of beautiful things, and I wished I’d seen them with her. I also wish I’d gotten the earrings she had me model. The fact that I didn’t should provide insight into how bad I was feeling. Oh well — there is always next time! 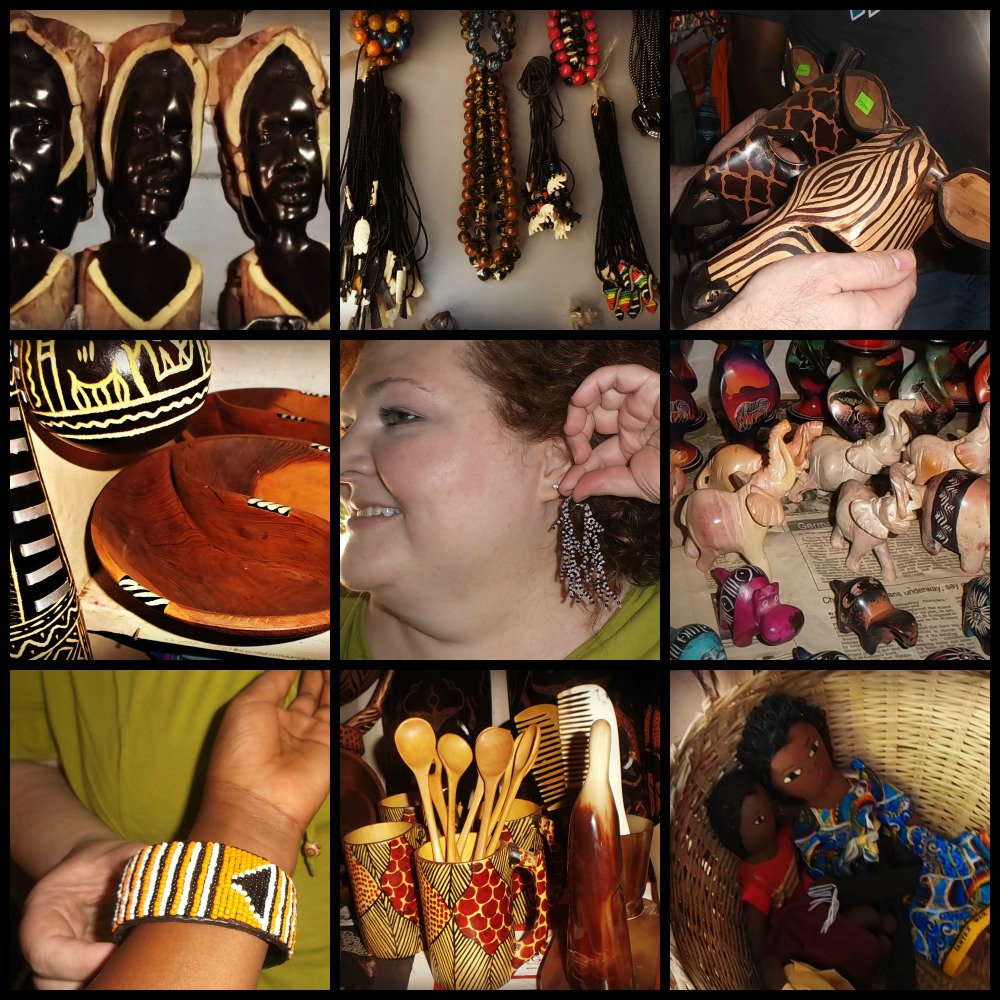 As we made our way out of  Kampala, Violet kept snapping pictures. She is just like her new mama in that regard! She took many pics of the traffic, and captured one of the Mandela football stadium that was a bit further outside the city. 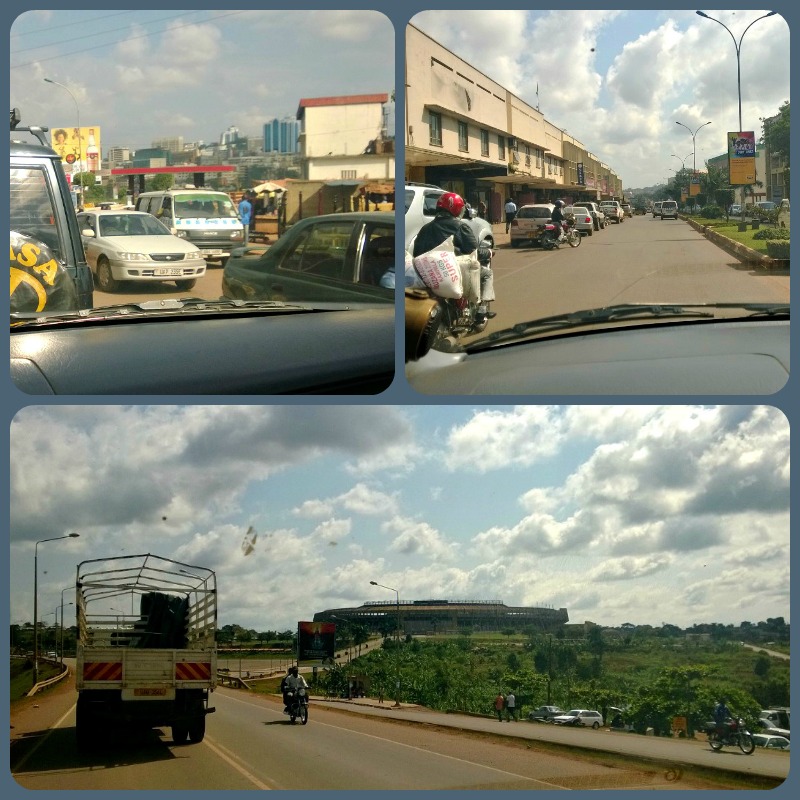 She also took lots of selfies, and pictures of her doll, and of Dad taking pictures, and even swiped my sunglasses and Donnie’s new ballcap! She is a hoot! And as you can see, she put stickers all over our faces. I don’t know what the story is behind Ugandan kids putting stickers on their faces, but they love to do it! 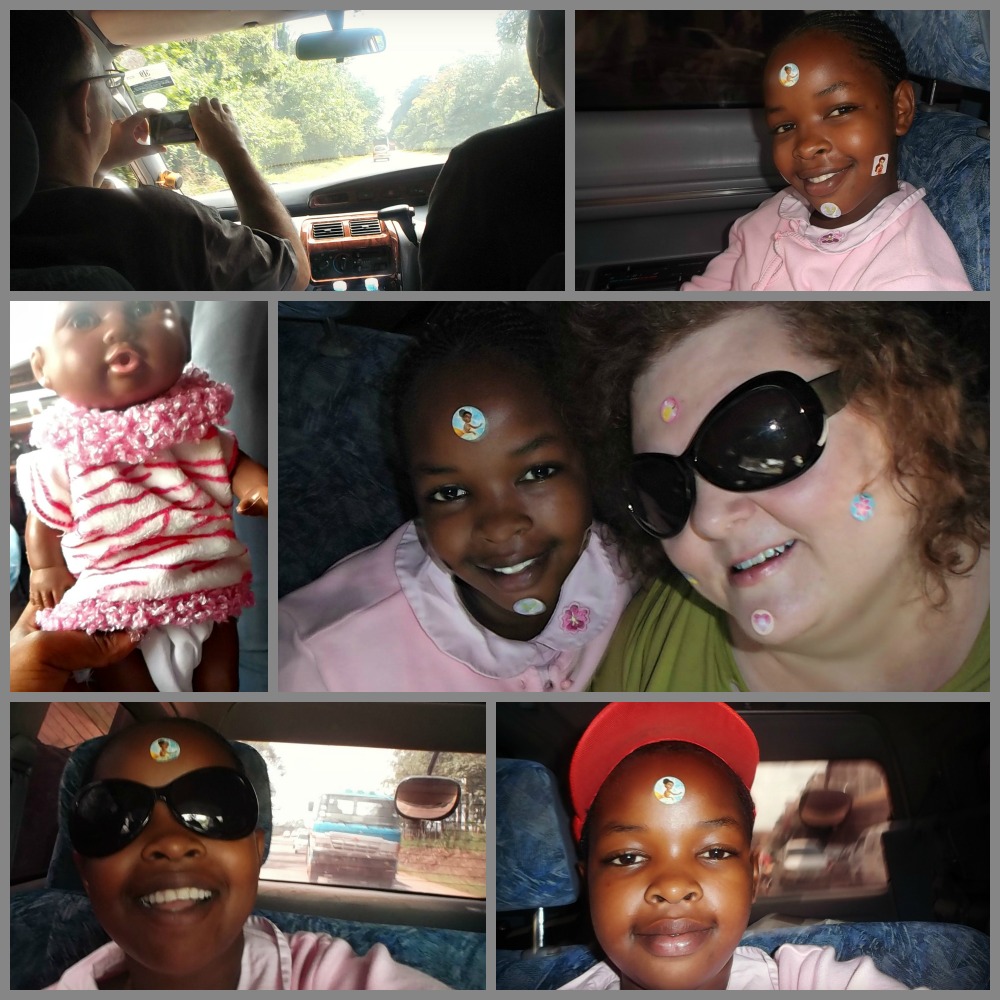 The road to Jinja was gorgeous. We passed rainforest and huge fields of sugar cane and tea. 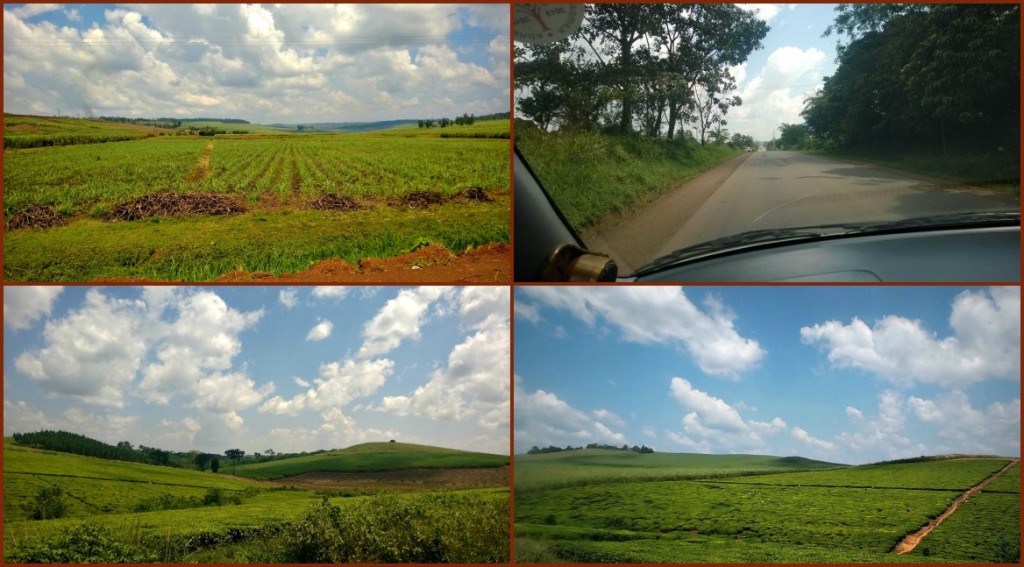 And we stopped to buy chicken on a stick from roadside vendors, as recommended by Francis. As we pulled over, he said, “Watch…we’re going to be swamped!” and we were! Dozens of people rushed the car, offering to sell us everything from the chicken, to sodas, to mysterious-looking meat chunks on sticks and roasted bananas. A little boy stopped by my window and wanted to sell me a bunch of tiny bananas. It was a little overwhelming and I was glad that I wasn’t lying when I told him that I had no money (Donnie handled all the cash for us).  It only took a few minutes and Donnie, Francis and Violet enjoyed their lunches of chicken, chapati and roasted bananas as we drove off again. 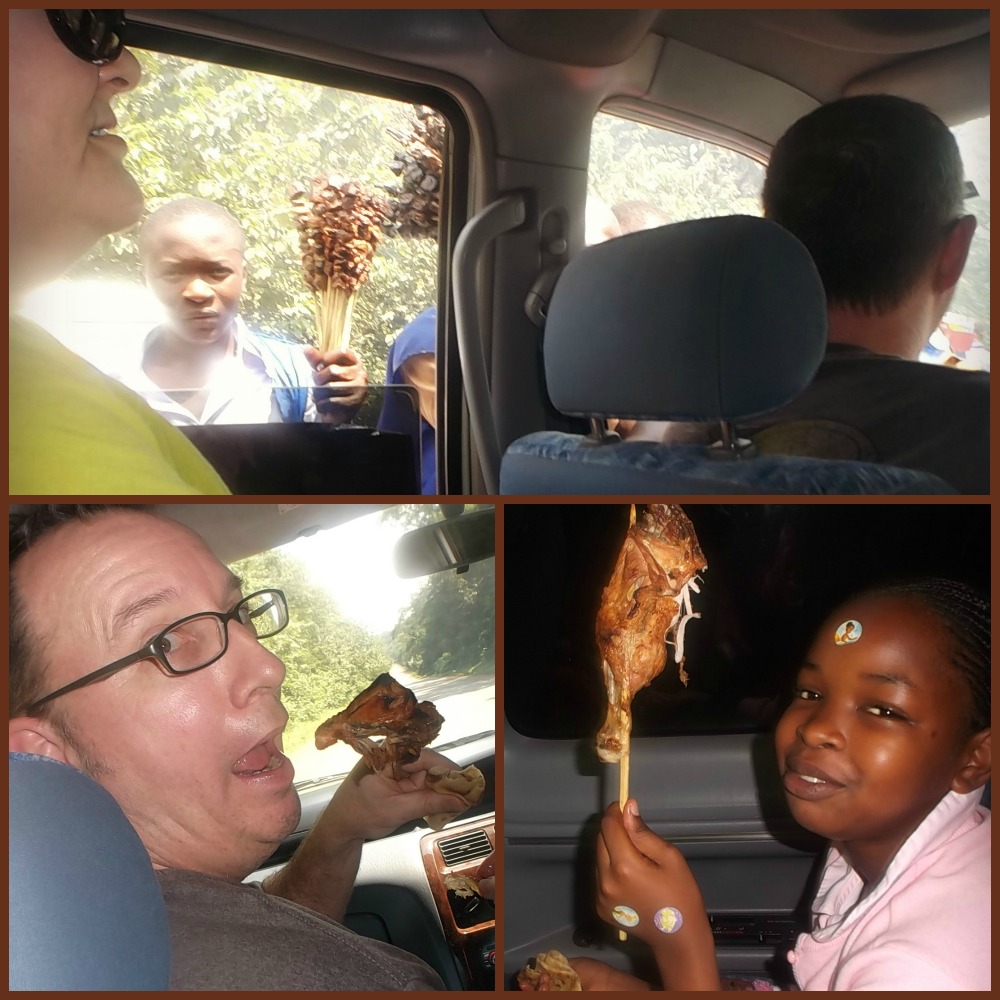 I didn’t want to eat, since my stomach was still off, but Donnie was raving about the food and insisted I take a taste of everything. I admit — the chicken was amazingly grilled, the chapati very flavorful and the roasted banana reminded me of soft, cooked plantain. I probably could’ve managed a banana or a whole chapati, but one of my greatest traveling fears was being hit with the “Big D” and not having access to a proper toilet. (NO food is tasty enough for me to risk facing a squalid squatty-potty or having to duck behind a snake-and-bug infested bush beside the road!)

About an hour later, we finally caught our first glimpse of the Nile River, which marked our entrance into Jinja. It was so beautiful! 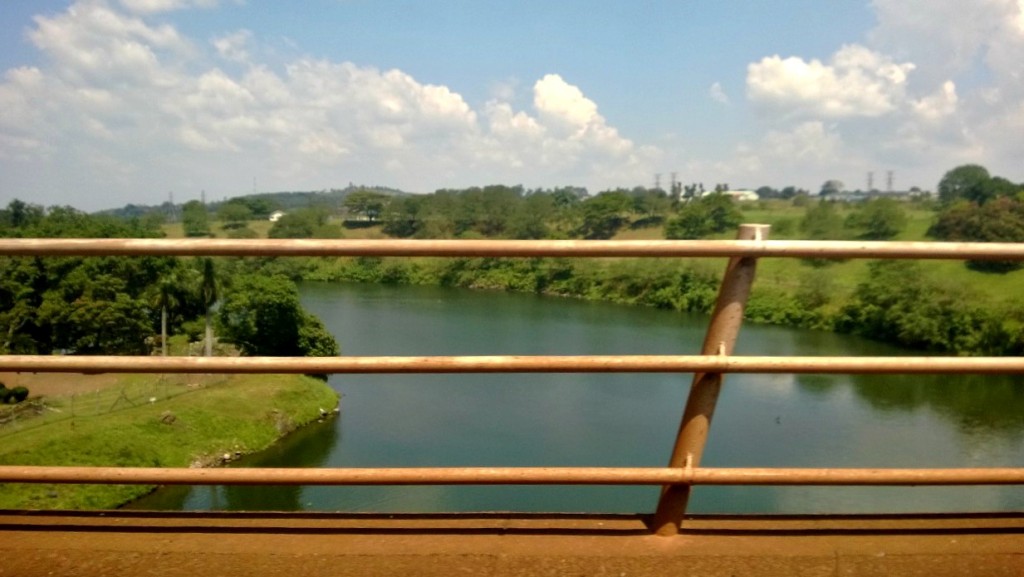 After crossing the bridge and going through a roundabout, we turned onto more country-looking roads as we headed to our first stop: the temporary location of Violet’s orphanage. Finally, I would get to meet the other children I’d only known so far through photographs and Skype!