The funny, metallic pinging of “My Heart will Go On” filled the air as Donnie and I turned to see rural Uganda’s version of the ice cream truck. 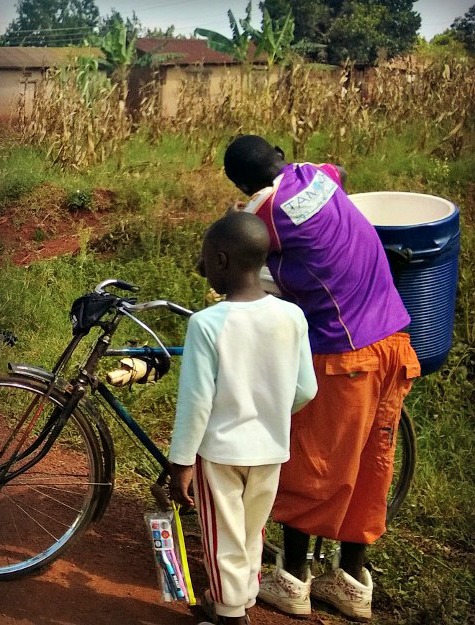 I love the ingenuity and resourcefulness I see in Ugandans. I think we’ve had such an easy life in America for so long, that we tend to sit back after some small effort and declare that a thing cannot be done. In Uganda, they take what they have and make it work. So, this young man found a way to offer relief from the heat in the little poor area called Mpumudde — he filled a cooler with ice cream, secured it to his bike and drove around town, selling it for 1,000 shillings or so per cup. (That’s less than 50 cents U.S.)

The kids knew what it was right away, and Violet asked if she and her friends could have ice cream. Ha! As if we could say no to faces like these? (Still bearing the stickers they got in their dental care kits!) 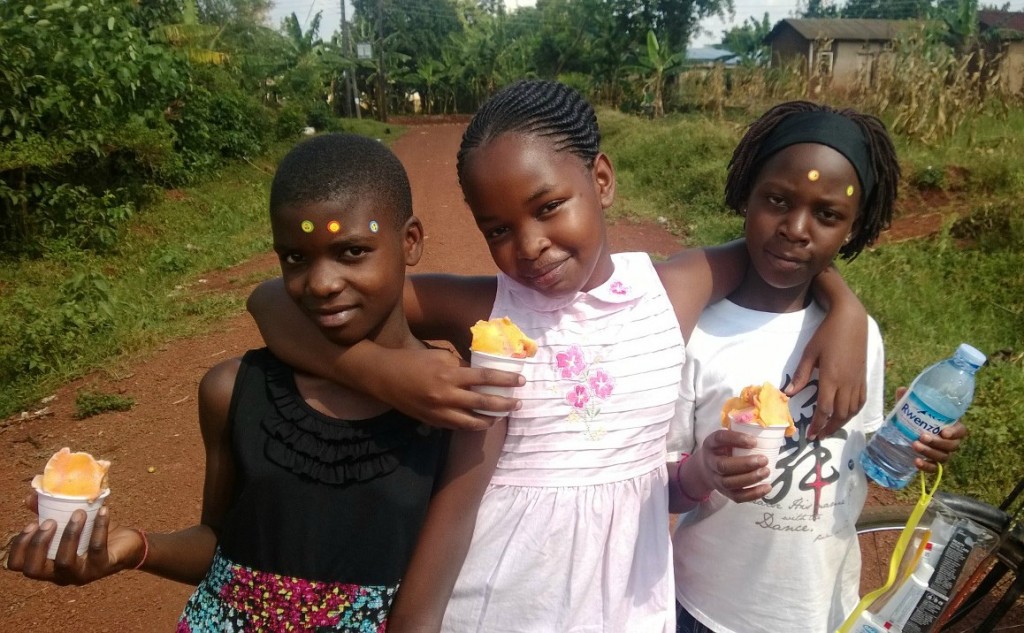 I could tell by the way she was beaming that it made Violet happy to be able to offer this to her friends. Ice cream is a rare treat, and she says it’s one of her most favorite things to eat. (How fun is it going to be to take this girl to Dairy Queen?)

As Donnie was standing by the ice cream man and taking these photos, I was standing in the shade next to the van, talking to our driver, Francis. I think I’ve mentioned before that traveling with Francis is like having your own personal minister, life coach and encourager by your side. He is just a phenomenal human being. He said, “I think that ice cream man is going to thank God for blessing him today!” and I looked up to see Donnie waving some of the neighborhood kids over so he could buy them ice cream, too. 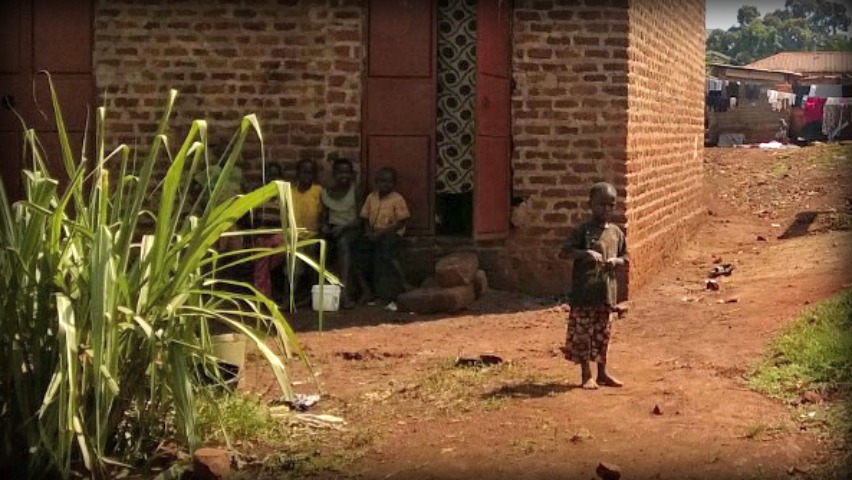 They’d been watching us from afar, but with great interest since we’d arrived to tour the property. We were actually getting ready to leave when the ice cream man came, and these kids had crept ever closer toward the road, to get a better look at what these muzungus (white people) were doing. One of my regrets is not capturing a picture of their smiles as Donnie invited them to come have ice cream, too. It was so precious to see their faces light up! 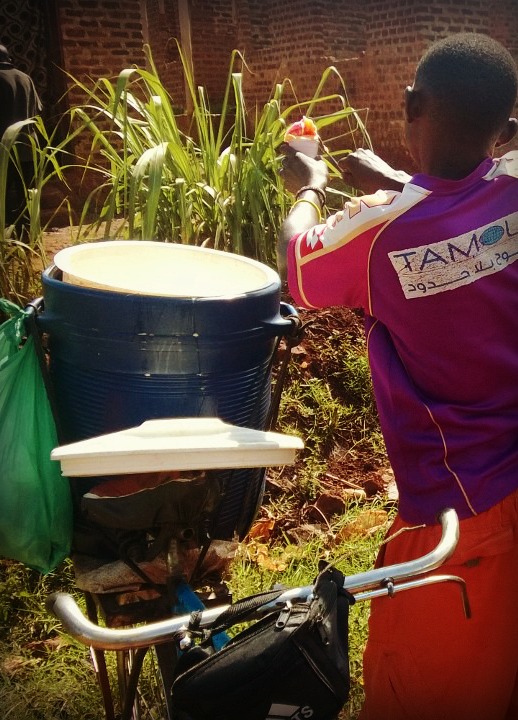 They stood patiently and quietly as the man scooped their ice cream, one cup at a time, not jostling or shoving ahead of each other like American kids that age might tend to do. 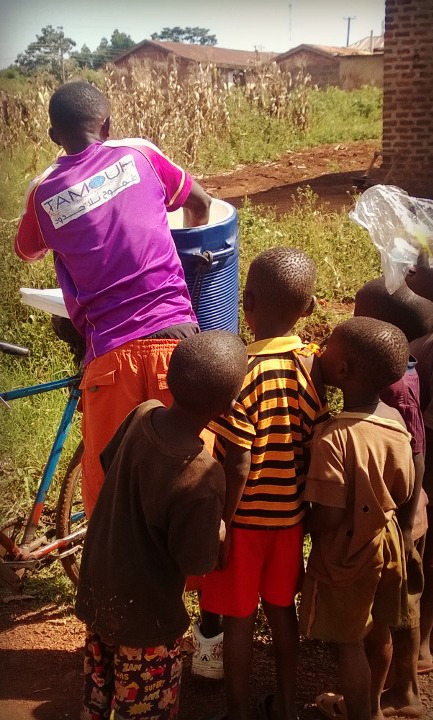 And one by one, they gently shook Donnie’s hand and told him, “Thank you,” in their sweet little accented voices. 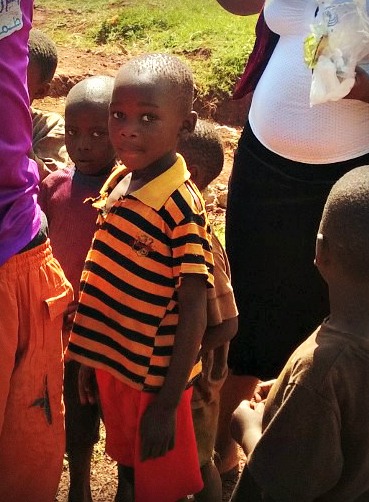 One child held Donnie’s hand and kneeled down as he said thanks, and I could tell Donnie was choking back tears just like I was, watching everything just a few feet away in the shade.

One little boy was dressed in clothes so dirty you couldn’t really tell what color they’d originally been. He looked to be about four, the same age as our youngest son back home. That sweet child walked past me slowly, holding his paper cup of ice cream in both hands out in front of him, his huge eyes staring at it like he just could not believe his good fortune. It was like he was so amazed, he didn’t even want to take a lick of it, for fear he’d ruin the moment.

Like it was the most beautiful thing he’d ever received.

A simple cup of ice cream….

News spread fast, because a few more kids came running down the street, and after ten or so had been given ice cream, Francis and the pastor suggested that we stop buying it because we could be there all day. As Francis said, “The needs here are so great — there is no end to them.” I could tell that Donnie didn’t want to tell anyone no, and I didn’t either, but we understood the wisdom behind what our Ugandan friends were saying. Donnie took the change he received from the vendor and gave it to an old man in tattered clothing, limping down the road. As we drove off, I could see the kids who had ice cream sharing bites with the ones who came too late, and it just warmed my heart to see no jealousy or covetousness — just that warm, generous Ugandan spirit of giving that we’d already witnessed so many times.

A few weeks ago, Donnie and I were reminiscing about that day. His eyes grew misty and he said, “I never told you this, but I’d prayed before we went that I’d have a chance to buy ice cream for some kids.”

It was such a simple answered prayer that became one of the highlights of our trip, and I’m failing miserably at articulating how much it meant to have been given that opportunity to bring a little joy into those kids’ lives. Because until the day I die, I will never forget the sight of the small Ugandan version of my boy Jonah, beaming brighter than the sun, gingerly carrying that ice-cold treasure in his dusty little hands.