I was thinking earlier today that if the adoption experience was equal to the birthing experience, I’d have delivered four or five babies by the time this is all over.

I don’t mean months-wise (although…9 x 4 = 36 and we ARE into our third year of the process) but I mean in regard to the number of times this process has felt like being in labor.

Just so, so much painful waiting…

Except we’re birthing documents, not babies.

Now before I delve into this, a disclaimer: this is not meant to generate any back-patting for me or my family. It just struck me today how much I admire the adoptive families I know. It’s kind of like before you have kids, how parenthood looks stressful, but totally doable and you just have no way of knowing how thrilling and amazing and heartbreaking and exhausting it actually IS. You can’t know it til you live it.

I have to confess that I went into adoption wearing somewhat rose-colored glasses. It seemed easier than those high-risk pregnancies I’d gone through. It seemed like such a beautiful way to build a family — and it most certainly is! — but it didn’t seem especially hard or grueling. I guess maybe I was reading the wrong blogs, because now that I’ve been immersed into the adoption world for over two years, I am blown away by what some people have gone through to adopt.

So the point of this post is to say to all my adoptive friends: you rock for enduring all you’ve endured. We’ve had it so easy compared to so many of you. After I delivered my first child, I had a whole new appreciation for my mom and every woman before me who’d ever gone through that pain and lived to tell about it. And I wasn’t sure I was made out of strong enough stuff to do it again. I feel the same way now about adoption — I have the deepest respect for those who’ve gone before us, and that’s just multiplied for those who’ve adopted more than once. Just…wow. Your strength and perseverance blows me away. Here’s a virtual “high-five” for you all.

The first “baby” we had to deliver was getting our homestudy approved. Not to be crude, but everything that went into that felt as intrusive as the repeated pelvic exams of pregnancy. It felt like documenting everything right down to the time you last burped, with no guarantee that you’d be approved at the end of it. I don’t even know if I was blogging yet when those papers came in, but this was me the day of their delivery: 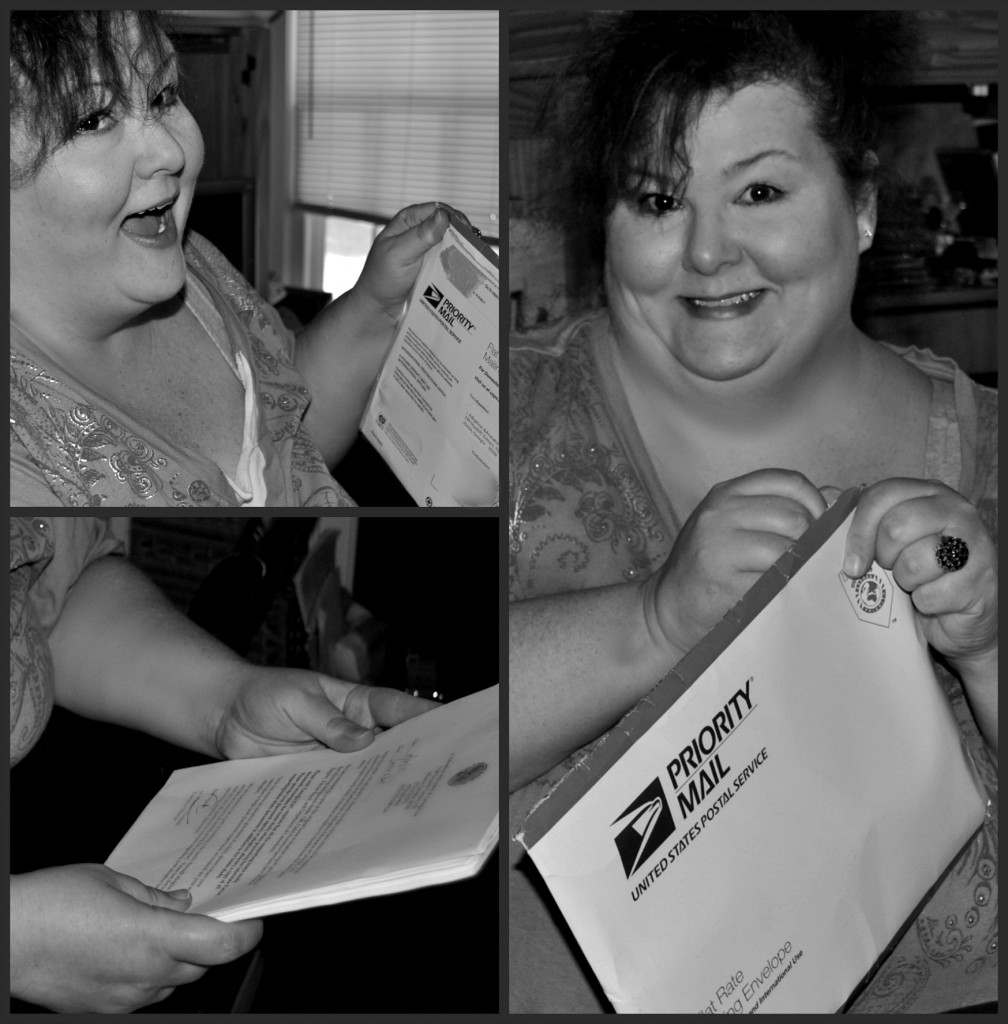 I was sooooo stinkin’ happy!

And then we entered into our next gestational period: waiting for a court date. It was active waiting, with fundraising and praying and the mailing of papers and the paying of legal fees, and lots of other little waiting in the form of meeting monetary goals and missed communications with the lawyer. And that actually morphed into a time period nearly two pregnancies long, as there were delays in the courts, and with our judge in particular, and then a big false alarm when we were offered a short-notice court date that we couldn’t accept.

But finally, the pushing and groaning and aching and praying and crying was over, and it came. Another crucial delivery complete! Another period of waiting ended.

So then we left on a plane to go meet our daughter, and had the most amazing trip, and court went well and we began the next phase of waiting — to receive the judge’s ruling. We thought the hearing went well, we were promised to receive a ruling one week later, but alas — the promise of a week extended into six and once again, we were agonizing, waiting…waiting…waiting and like contractions in labor, not really able to do anything to alleviate the pain.

For adoption offers no epidural.

And the waiting hurt extra-badly because we’d seen our daughter, and held her and connected with her, only to have to leave her behind.

But then, it came! And OH, the relief when we saw the judge ruled in our favor. This girl was OURS now. Amazing stuff!

But…and I know you’re seeing the pattern here…today we’re “pregnant” again, defined by Webster’s dictionary as, “having possibilities of development or consequence : involving important issues rich in significance or implication.”

Yep. We’re “preggers” alright. This time, the “baby” is her passport, which we’re told would come on Friday, but in reality could take longer than that.

And then she has to pass a physical, and then the United States Embassy has to give us permission to fly her home. Even though the Ugandan courts have already declared she belongs to us now.

More waiting. More laboring. More unknown outcomes. More digging up drying-up reservoirs of blind faith that all things will, indeed, work together for our ultimate good.

I’ve had three high-risk pregnancies, two labors, three births and I’m here to tell you: the physical stress of carrying a baby is nothing like the mental stress of adopting a child. It sounds cliche to say it, but of course it’s all worth it in the end. But now, nearing the end of the process, anticipating my last few “Document Deliveries” I just want to salute every family that’s ever gone down this road. I’ve met so many amazing people and I have a huge respect for them, for fighting for their kids when it would’ve been a thousand times easier to just quit.

Janice and Christy and Tim and Laura and Chicke and Robert and Bonnie and Colleen and Jessica and Diane and a dozen more whose names evade me at the moment — y’all rock, my friends.

Thanks for coaching me, inspiring me to keep breathing and pushing and working hard until our sweet daughter is home.