Once again, I am behind on sharing an update on how we’re doing and that’s partly because we’ve been so darn busy every minute of the day, it seems. And it’s partly because of some really negative comments someone posted here that discouraged me from writing for a while.

I ultimately didn’t publish the comments because hey — it’s MY blog, and my husband and I decided that we have no obligation to give a voice to blatant negativity. Despite commenting on several posts, which meant he or she had read a lot, this person clearly had little understanding of our case, of our story or the ethics involved in this adoption. It’s easy to look at the surface information that’s shared in a public place such as this and form opinions not grounded in facts. (Come to think of it, that’s one of the biggest problems of the Internet, period.) That is what this person did and accused us of buying a child, denying her rights, bribing officials (???) and other awful things that were never anywhere on our radar, much less actually happened.

Are there things we’d have changed with the clarity of hindsight? Absolutely. But the bottom line for us always was that we wanted to follow God’s leading with regard to Violet and our prayer all along was simply for His will to be done in her life and in ours. I’ll go to my grave believing in His faithfulness, that His will was done and continues to be, and that He has a plan for her that, for whatever reason, included being part of our crazy Muzungu family beginning at this time in her life.

Being her mom is rather like watching a flower unfurl before your eyes. Every new experience opens up something new inside and it’s just an absolute honor and privilege to experience this.

When I first started this post over a month ago, I was thinking about textbooks and dentist’s chairs.

In late August, we started our private school/homeschooling combination, and we were blown away by our daughter’s work ethic. If I assign her two workbook pages, she insists on completing six. Some days, I have to make her stop working; she will even skip lunch to work. Leaving anything blank causes real stress for her, and she can be perfectionistic about details. I’m sure that some of that is rooted in fear of the shaming and/or beatings they would get in Ugandan schools, (which makes me so sad to even think about anyone beating this precious girl) but I can also tell that a lot of it is simply her intense hunger for learning. She wants to master English and has a drive for education that I’ve never personally witnessed in a child before. It’s so refreshing to behold!

She was so excited to get her textbooks. I’m used to my sons being indifferent, or even groaning, when being presented with new school books. Violet marveled at them. “I’ve never had big books like these,” she shared. It was another one of those things that I hadn’t really given much thought to before. She explained that in school in Uganda, only the teacher had big textbooks. The rest of them might sometimes have small workbooks, but mostly the teacher taught from her book, wrote on the board and they did their work on pieces of paper. (This is a pic from one of her schools in Uganda.) 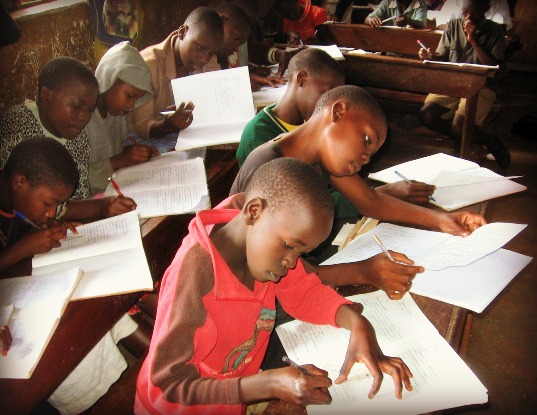 It was hard for Violet to believe that she had her very own big books to study, in all five subjects; not only that, but that she had her own personal seat and workspace. She also couldn’t believe the fun she had doing science experiments at school, and was elated to earn an A on her very first science project. She is so proud of what she’s accomplished, and we’re proud of her, too.

In August, she visited our dentist for the first time. Bless her heart, she was so worried about going. She had to have some baby teeth pulled when she was younger and I’d never gotten any details about that except that it was her only time seeing a dentist, and there wasn’t any anesthesia. “It pained me badly,” is all she said. I kept reassuring her that they would give her numbing medicine if she needed anything like that here, but she was still very anxious about going.

Well, we got there and she oohed and aahed over the dentist’s chair and even insisted I take a picture of her sitting in it. 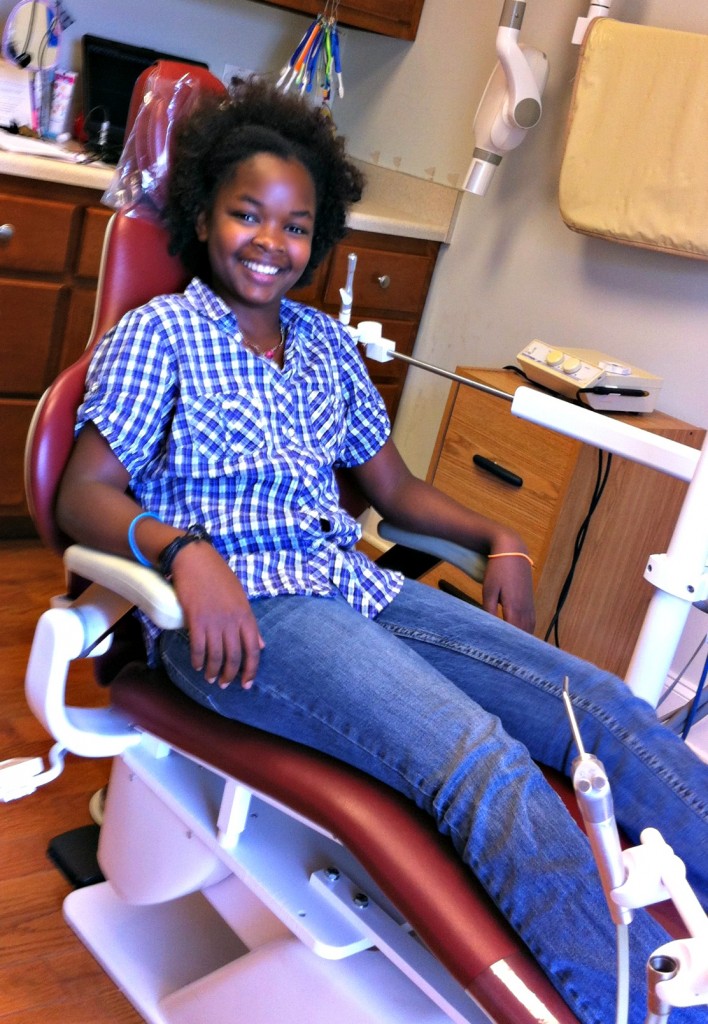 When I asked if that was the kind of chair she sat in at the dentist in Uganda, she laughed and said, “Oh, no! It was like that one,” and she pointed to the plain wooden chair I was sitting in.

I just can’t even imagine….

She was fascinated by how the chair reclined, and rose up and down, and I had to ask her to stop touching stuff! But our hygienist, Lindsay, is the nicest person in the world and said it was no bother. She patiently explained everything to Violet, and cleaned my teeth first so that V could see what to expect. It was so kind of her, and I had the benefit of having two attendants, because Lindsay let Violet do the slurpy-spit-vacuum thingie on me, which she loved doing. When it was her turn, she hopped into the chair and after, seemed amazed by how clean her teeth felt. Her teeth were in better shape than I’d expected them to be, although she did have a few cavities.

Other firsts over the past few weeks have included her first church supper, (where she marveled over having open access to that much food), her first trip to a beauty salon (which she adored and completely won over every stylist in the place) and her first taste of cool fall weather (which she, unsurprisingly, is not very fond of!). She does think the leaves changing colors is absolutely amazing, though. And she is so looking forward to her first birthday celebration and first Halloween, both occurring later this month. I’ll be sure to update with new photos and stories soon after! 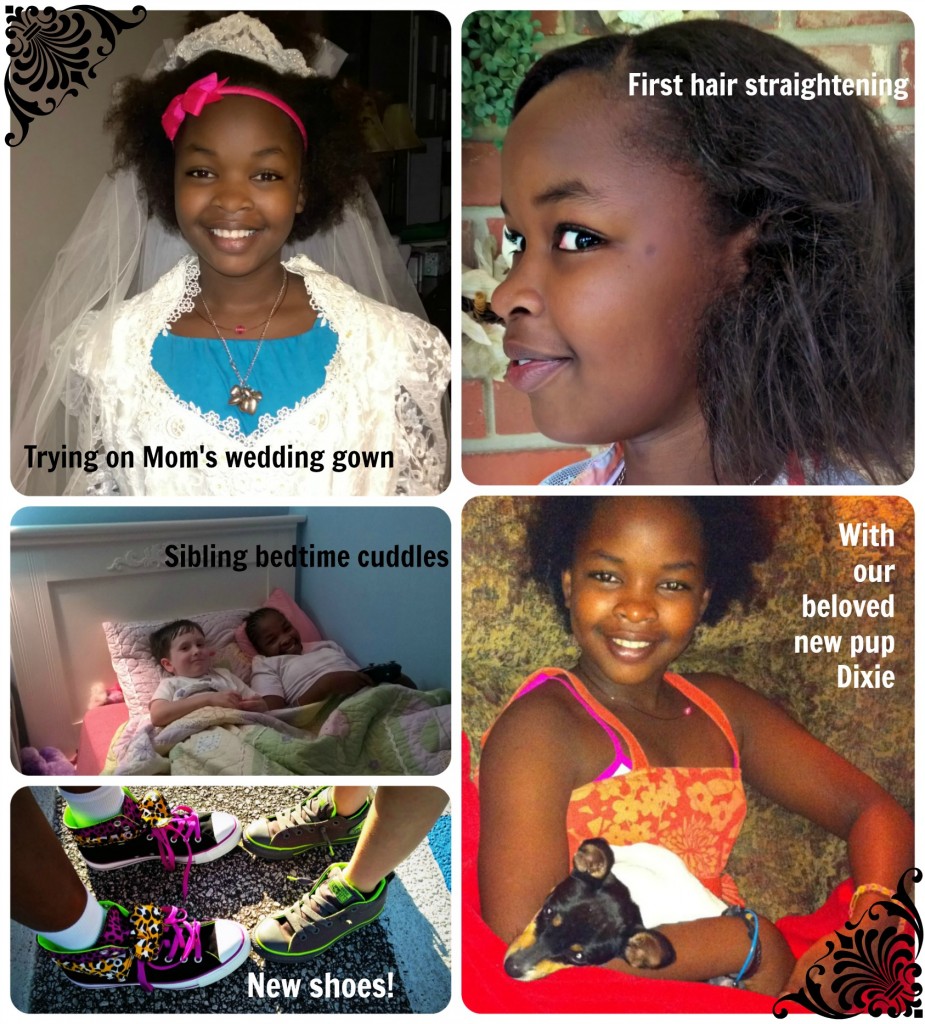