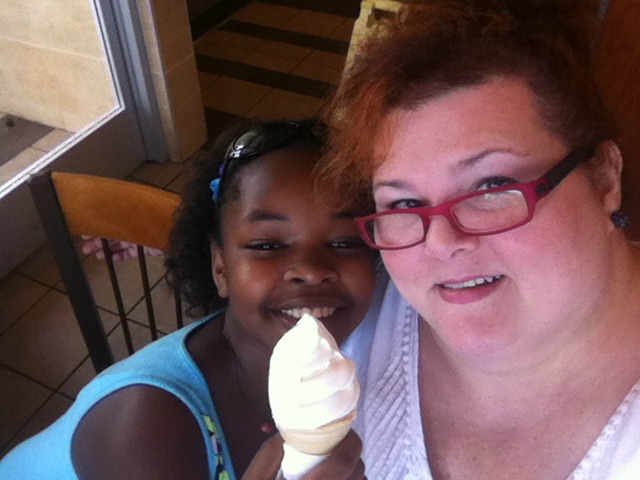 I knew years ago that our daughter was a girly-girl. And that having her here would be a breath of fresh air for this mama who’s spent the past 16 years of her life marinating in testosterone. But I never really thought about how she might change me.

Now, don’t think I have anything against my boys. I don’t, at all. They are each awesome in their own unique ways and I thank God daily for the gift all three are to me. But having a female child lets me express sides of me that have only come out around my sisters or friends until now. And I think my older two sons are a bit baffled by the things they see me doing daily, that they never really saw before.

For instance, dancing. Violet loves to dance. My older boys, not so much. I’m not very skilled in the dancing department, but I’ve been known to occasionally cut a rug with my girlfriends before, or with Jonah, who can’t sit still when a catchy tune comes on. So when Violet is jamming, sometimes I shake my booty, too. And my older boys look at me as if to say, “Who is this woman, and where did the aliens take my mom?”

It’s the same with singing. My voice is most definitely in the “joyful NOISE” category. But Violet loves to sing, and yesterday I joined in (loudly) on her daily rendition of “Do You Want to Build a Snowman?” and then, as I’m wont to do, mixed up the lyrics to fit what we were doing at the moment. It was hilarious, and even the boys were laughing, but they still looked at me strangely, not sure what to think of this sudden emergence of daily singing and dancing from their previously more reserved mom.

My middle boy has taken an acting/singing/dancing class for several years now, but he rarely shows me what they do in class. And when he does dance, it’s usually something very complicated that I couldn’t even begin to copy. So I just observe.

Anyway, it just never occurred to me that my daughter would bring out these things in me, nor had I ever realized how little my boys had witnessed that part of Mom.

One of my sons (who shall remain nameless for the moment) accused me of being “fake”, of putting on behavior because I’m trying to be something I’m not. I found that accusation rather interesting, aside from the obvious teenage black/white mentality that wants to stuff people and ideas into very specific pigeon holes. I could see how it looks that way from his perspective. And I’m not even sure why I suppressed certain aspects of myself when I only had sons.

Maybe it’s because moms tend to do that reflective behavior thing that you witness when spoon-feeding a baby? Almost all parents will open up their mouths involuntarily when encouraging a baby to take a bite from a spoon. And I think parenting is like that in so many other ways. You look to the child and rather subconsciously follow their lead. And until now, I haven’t had any children who loved to sing and dance around the house. My sons have led me to Legos, and Star Wars, and dubstep music, to muscle cars, softball games and the Xbox — all things I never would’ve welcomed into my life had I not been following my sons’ leads.

So, it’s not being fake. It’s being a mom. And having my new daughter draw out of me things that, aside from karaoke nights out with my friends, never really were invited to surface.

I suppose I need to warn the boys now: there’s going to be an even greater increase in ALL things girly: nail polish, hair sessions, craft parties, doggie dresses and bubble baths. Ample amounts of the color pink dotted around the house.

And, of course, ever more embarrassingly impromptu musical performances by Mom and Violet.